New Bill To Make D.C. A State Passes House, Moving On To Senate 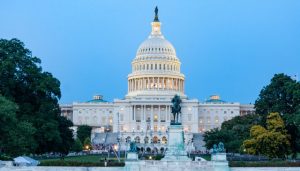 A brand new bill that would turn Washington, D.C. into the 51st state in the Union has officially passed the U.S. House of Representatives Thursday and is now on its way to the Senate.

This legislation would create a new state called Washington, Douglass Commonwealth, and would constitutionally require one representative and two senators.

A federal district carved out from all the states would remain, but would only include a small strip of land that incorporates the White House, Capitol building, and the National Mall.

While an important step for proponents, the legislation is considered dead on arrival in the U.S. Senate, where all Republicans oppose. West Virginia’s Democratic Senator Joe Manchin has also announced he will vote against the bill.

President Joe Biden is a big fan of the idea, stating the current federal status of the district is “an affront to the democratic values on which our Nation was founded.”

The major objection to the statehood of D.C. is the fact that the creation and limitation is outlined in the country’s founding document, the Constitution, which many scholars say would need an amendment in order to change parameters before statehood can even be considered.