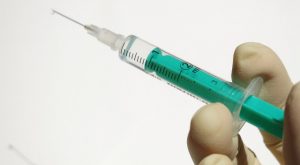 The Alabama Legislature passed a new piece of legislation on Tuesday that is going to make child sex offenders all across the state pee their pants in terror.

In other words, it’s the perfect way to handle these sick, disgusting perverts. Man, the south is just on point lately with the laws they’ve been passing. Hope the rest of America is taking notes.

Anyway, the bill calls for the chemical castration of some child sex offenders as a mandatory condition of parole. House Bill 379 is now on the governor’s desk for him to sign.

House Bill 379 requires that “as a condition of parole, a court shall order a person convicted of a sex offense involving a person under the age of 13 years to undergo chemical castration treatment, in addition to any other punishment prescribed for that offense or any other provision of law.”

The bill was sponsored by state Rep. Steve Hurst (R), who told WIAT-TV that child sex offenders “have marked this child for life and the punishment should fit the crime.”

Hurst had introduced the bill before, but now it is set to become law if Gov. Kay Ivey (R) signs it.

When Hurst was asked whether or not this was inhumane, the lawmaker responded by saying, “I had people call me in the past when I introduced it and said don’t you think this is inhumane? I asked them what’s more inhumane than when you take a little infant child, and you sexually molest that infant child when the child cannot defend themselves or get away, and they have to go through all the things they have to go through.”

Hurst knocked that one out of the park, wouldn’t you agree?

Hurting an innocent child, scarring them for the rest of their life psychologically, that’s truly the inhumane act in this kind of situation. It’s disgusting to the fullest extent and definition of the term.

Chemical castration requires the individual sex offender to take drugs to reduce sexual urges. Heck, this is the least these sickos could do. In all honesty, this is still getting off light.

If the bill is signed into law, it will require parolees to be administered their first dose of the medication prior to release from the correctional facility. They would then be required to receive follow-up treatments from the health department thereafter.

So who would be paying for all of this treatment? The parolee. Sounds good, right?

If you refuse to take the treatment, you go back to jail.

Every state should be passing laws like this one. What are we all waiting for?