New Battleground Polls Have Some Excellent News For President Trump 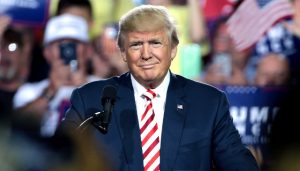 Biden is pretty far ahead of the competition in the Democratic field, though Biden and Trump are both pretty close together in Michigan.

This is great news for those who want to see four more years of Trump and more importantly, seeing Democrats lose their minds for another term.

The Firehouse-Optimus poll, conducted from June 11-13, shows Trump with a tremendous surge in Pennsylvania; Biden had an eight-point lead in March that has narrowed to a scant one-point lead. The Trump “base” in Pennsylvania has a huge lead over the Democratic “base.” Trump’s stands at 42%, dwarfing the Democrats’, which is at 24%. The poll adds, “This is a recurring trend across states- those who say they will vote for Trump are very consistent across ballot tests, while many Democratic-leaning voters fluctuate between supporting the Democrat, a generic third-party candidate, or not being sure.”

Since March, Biden’s lead over Trump in Wisconsin has shrunk from 12 percentage points to six. The Trump “base” in Wisconsin, according to the poll, rests at 37%; the Democratic “base” stands at 32%. Trump’s approval rating has risen from 41% to 44% since March.

In Michigan, where the Trump “base” is 39% and he Democratic base rests at 32%, Trump and Biden were tied in March; Biden now holds a slim three-point lead, leaving them in a statistical dead heat.

In what must surely feel like a victory for the president, the majority of respondents to all three polls opposed Congress launching an impeachment inquiry against Trump.

If the president wants to take Pennsylvania, he’s going to need to focus his efforts on winning Northampton county, which overwhelmingly supported Obama during both his runs for office, but switched to Trump in 2016.

One thing’s for sure. It’s going to be a super tense election season.