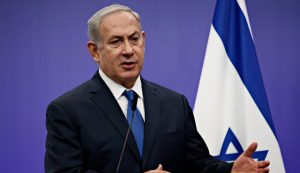 According to Israeli Prime Minister Benjamin Netanyahu, Iranian forces launched an assault against Israel this week using an armed drone. Along with this, forces located in Lebanon launched a rocket attack at Israel earlier in the week.

Netanyahu spoke on Thursday revealing the attack right after a meeting with a top German official, stating a drone packed with explosives was fired at his country this week and that it came from Iran.

“I described during our meeting that while we’re fighting on various fronts, the true backer of much of this aggression is Iran,” Netanyahu stated. “Iran not only supports completely the Islamic Jihad in Gaza, and gives them all the financing. They also give weapons to Hamas, as well as to Hezbollah. And they provide the scaffolding on which these organizations really work.”

“While we were engaged in these hostilities, a few days ago, Iran sent an armed drone to Israel from Iraq or from Syria, Iranian forces launched a drone, armed drone, which our forces intercepted on the border between Israel and Jordan,” Netanyahu went on to say. “And that I think says everything on the true patron of terror in the Middle East and in the world, Iran.”

Prime Minister Benjamin Netanyahu met this afternoon, at the Kirya in Tel Aviv, with German Foreign Minister @HeikoMaas and showed him an Iranian UAV that had been downed in the Beit Shean area. pic.twitter.com/gXWItAuQjv

The news comes as Democrat President Joe Biden has sought to reenter the highly controversial Iran nuclear deal and has eyed rolling back sanctions on Iran, which is the world’s leading state sponsor of terrorism.

Yesterday, the Israeli Defense Forces (IDF) said that a rocket attack was launched from Lebanon this week and that Israel responded with an artillery barrage.

“Following the previous report regarding the sirens which sounded in the Lower Galilee and Krayot area, four rockets were fired from Lebanon into Israeli territory,” the IDF said in a statement yesterday. “The Iron Dome Aerial Defense System intercepted one of them and the rest most likely fell in open areas. In response, IDF Artillery are striking a number of targets in Lebanese territory.”

Doesn’t this make you miss Trump? Remember when he was in office and worked on brokering deals to help bring peace to the Middle East? Things were going fabulously. And then BOOM!

Now we have Biden in office and he’s already shunning Israel, one of our greatest allies, and siding with terrorist groups who want to see Jews murdered by the thousands.