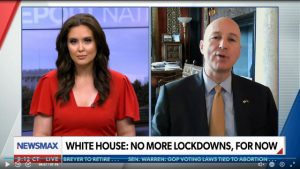 Nebraska Gov. Pete Rickettes, who is one of the first state leaders that began to push back against lockdowns and mask mandates during the early part of the COVID-19 pandemic, stated that returning to these measures in his own state would not work out very well.

“What we have done is focused on protecting our hospital capacity and getting older folks vaccinated,” the Republican governor went on to say during an appearance on Newsmax’s “National Report.” “Further lockdowns would be counterproductive; the same thing with this flip flop on the mask mandate for indoor people. That’s just counterproductive to getting people vaccinated and, frankly, runs against the science.”

Lockdowns, the governor said, have “unintended consequences that are bad for society.”

“We’ve seen it here in Nebraska with things like increased drug overdose deaths,” Ricketts went on to say. “We know how harmful it is to children to not be able to be in school. All these sorts of things were the bad side effects of lockdown, so we’ve got to avoid it. We just need to focus on continuing to ask people to get the vaccines and making sure that we’re protecting our hospital capacity.”

Ricketts does back COVID-19 vaccines, even if he doesn’t believe the “heavy hand of government” should come into play, and he said he wants President Joe Biden to encourage people to get their shots.

“The things that the administration has been saying around these mask mandates … going door-to-door, that’s not helpful,” said the governor. “The things we’ve been seeing from the administration actually harm our efforts to convince those folks who are still uncertain about the vaccine. This is an education campaign. We’ve got to continue to work with our friends and families and neighbors who have not been vaccinated.”

Instead, he said he’d like to see the government shift to “treating people like adults, which they are, and just simply educate them on the benefits of getting a vaccine.”

It’s also been suggested that wearing N95 masks would be more effective than wearing a cloth mask, but at the end of the day, one must remember that COVID-19 is a virus that is “never going to go away” and the question of masking gets back to whether people will want to wear them at all, Ricketts said.

“I certainly don’t think that the CDC is going to recommend that we’re always supposed to wear a mask when we go inside,” the Republican governor said. “Also, the testing has changed so much. Their own metrics of community spread in positivity rates don’t make sense anymore, because we just don’t have consistent testing, and in fact, they never really did.”

The bottom line that we all need to accept is that the coronavirus is not going anywhere. We cannot stop it at this point. It’s going to be with the human race forever. It will eventually adapt and weaken itself in order not to seriously injure or harm its host.

We are always going to be facing a new variant. That’s just how it will be from now on, the same way it is with the flu. Masks aren’t going to change anything. Neither are lockdowns. As soon as people begin mingle, virus will come back. Period.