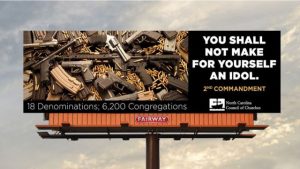 A religious group from the great state of North Carolina has decided to join the dark side and align themselves with the radical anti-gun movement in this country, taking out a billboard and attacking the Second Amendment as idolatry.

Yes, these fine folks have officially set aside their fully functional brain cells in order to take up the argument that guns — which are inanimate objects — kill people, instead of people killing people.

Perhaps the North Carolina Council of Churches is a bit in the dark about the explosion of knife attacks in London, which have gotten so bad they’re now pursuing knife control laws. Yeah, believe it or not, banning guns doesn’t stop evil.

The new billboard put up by the NCCC was posted along interstates 85 and 40 near the Burlington area and features a photograph of various guns sitting on a bed of bullets. The message featured beside the photo reads: “You shall not make for yourself an idol.”

This, of course, is the Second Commandment, though it’s being completely misused in this particular context. 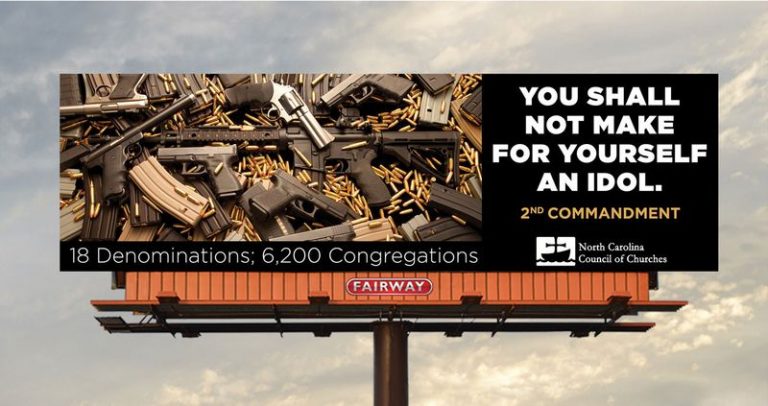 The NCCC spoke with reporters about the billboard saying, “For many of us, guns have become the symbol of safety, the idol we turn to because we ‘believe in them’ to keep us safe. God commands the people not to have any idols. Idols can assume a lot of guises in our world that we don’t immediately understand as idolatry.”

There’s so much wrong with that statement it could take a several posts, a book, a documentary series — and a bottle of scotch to numb the mental anguish — to explain.

You see, the concept of self-defense — using lethal force to secure life and property from criminals — is clearly taught in Scripture and the principles we glean from the Bible carry over into our modern world, including guns.

We also have Jesus Himself saying His disciples should be prepared for danger on the road by carrying swords in Luke 22:36: “He said to them, “But now let the one who has a moneybag take it, and likewise a knapsack. And let the one who has no sword sell his cloak and buy one.”

Now, obviously, the general principle here is that people have the right to protect their lives and property and to do so they need to have sufficient tools.

Back in Jesus’ time that was swords. In today’s world, that’s guns. Pretty simple, eh? And to think, some folks think exegetical Bible study is hard!

The NCCC is absolutely wrong on this one and their message is going to cause many who are young in the faith to think Christians as a whole are anti-gun or that it’s somehow sinful to own a gun, which simply isn’t true in the slightest.

Obviously these folks are wanting to look hip, cool, and trendy to appeal to the millennial crowd who can’t seem to make themselves a part of anything without there being some sort of ill-informed cause they can trumpet from the mountaintops.

Because apparently spreading the gospel and seeing folks get saved isn’t enough to satisfy their insatiable appetite for social justice.