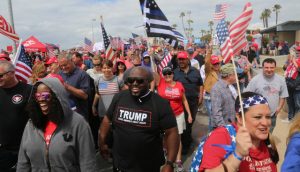 By now you’re all used to hearing about the obnoxious hypocrisy of the modern-day leftist movement in our country, particularly as it exists in the mainstream media, but we have to keep telling you about it anyway, because we have a duty, an obligation to resist and fight back against the absurdity.

During the closing of Wednesday evening’s program, Holt went on to address the number of deaths due to COVID and questioned whether those who are adhering to the CDC guidelines should be angry with those who aren’t.

“As we cross the quarter-million mark of those we’ve lost to [COVID-19] in this country, we are finding ourselves going through a familiar ritual; a shake of the head, a deep sigh, and a sense of helplessness,” Holt said. “But after that, what’s left? Maybe anger.”

Holt questioned whether the deaths of more than 250,000 people give permission to be angry at superspreader events. Meanwhile, the network was broadcasting images from last weekend’s “Million MAGA March” in Washington during which supporters of President Trump gathered to protest the results of the presidential election and a photograph of Notre Dame fans who stormed the field earlier this month after a stunning win over Clemson University.

“Surely we know better by now,” he said. “How about anger at those who refuse to wear masks or still cling to denial?”

The comment was coupled with a picture of an anti-lockdown protest.

Strangely, Holt didn’t condemn all of the Biden celebrations that were held when the mainstream media called the election for the former vice president. Nor did he condemn BLM protests, where thousands and thousands of people gathered in tight groups.

NBC Nightly News anchor Lester Holt ended the show tonight by stoking bitter hatred of Trump supporters.
Showing images of the weekend's march in DC (no mention of BLM protests), Holt proclaimed: "Do 250,000 deaths give us permission to be mad over these superspreader moments?" pic.twitter.com/8loMNIIFpv

Look, if the MAGA march was a superspreader, so were all of the events that have been held by the radical left over the course of the year. Be consistent in the application of your principles and beliefs. It’s really quite simple.

One of the reasons so many folks are ignoring the CDC guidelines is because the data and information we have on this virus continues to be contradictory. No one really knows what in the world is going on, and that makes it difficult to come up with a decent response.

No one should be mad at anyone. This virus spreads in a lot of different ways. It’s not always the fault of someone who doesn’t wear a mask. Besides, new data coming out says masks aren’t that effective.

We all just need to take a breath and think this through for a bit instead of being mad at each other.