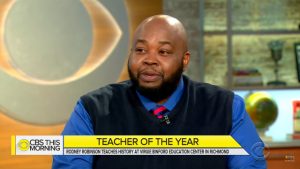 Rodney Robinson, a man who was deemed “National Teacher of the Year” in 2019 by the Council of Chief State School Officers recently posted on Twitter that the neighbors of Senate Majority Leader Mitch McConnell should act like a “true Kentucky hero” and violently assault him the way Sen. Rand Paul’s neighbor did back in 2017.

The assault on Paul left him with six broken ribs, an injury so severe it led to the removal of a section of his lung.

“Who are Mitch McConnell’s neighbors? I’m just saying Rand Paul’s neighbor did what a true Kentucky hero should do. It’s your turn to step up,” Robinson tweeted.

2019 National Teacher of the Year pic.twitter.com/0PQTDxos3v

Paul’s wife Kelly Ashby Paul issued a fiery response, tweeting, “I am so disgusted by this I have no words. The 2019 ‘National teacher of the Year’ is celebrating the violent assault on my husband that resulted in 6 broken ribs and part of his lung being removed. This hateful thug is calling for more violence on Sen McConnell.”

Robinson eventually deleted the tweet and posted a response to the backlash, which he blamed on “conservative bots“: “I made a Mitch McConnell joke today and the conservative bots are real angry. It’s funny because the joke was made early today and no one said a thing until I promoted black medical awareness.”

When he was awarded Teacher of the Year in 2019, the Council of Chief State School Officers said of Robinson, “He creates a positive school culture by empowering his students – many of whom have experienced trauma – to become civically minded social advocates who use their skills and voices to affect physical and policy changes at their school and in their communities,” CNN noted.

This man is a teacher. He’s in charge of shaping the young minds of future generations. This is someone who has influence and power.

How does he choose to use it? By calling for someone to get beat up for their political beliefs. What a lovely example to set for your students, right?

No one should be physically assaulted for sharing their political ideology with other people. Feel free to disagree with it all you like. But beating up someone over it? That’s ridiculous.