National Guard Troops In DC Have No End Date; 5,000 To Remain Until Mid-March 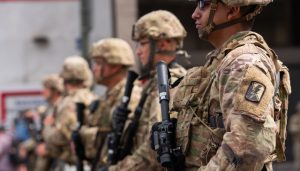 National Guard members are still on active duty in Washington, D.C. with no word on when they will be able to return home. In fact, a whopping 5,000 of them are supposed to remain in the city until spring.

Why do these folks really need to be there? Is this a good use of resources? It hardly seems like it. Is the left fearful for Joe Biden’s life? Why?

So many unanswered questions.

Three federal agencies and the National Guard still view a continued threat by right-wing groups who support Trump and see Democrats as dangerously corrupt as a threat to the District of Columbia, promising to keep 5,000 to 7,000 Guard troops on duty in support of law enforcement until mid-March, a decision that was made after the Jan. 20 inauguration of President Biden concluded.

More than 26,000 Guard members from all 50 states, three territories, and the District of Columbia were on duty providing security for the inauguration last week.

“They’re drawing down over the next couple of days,” National Guard Bureau spokeswoman Nahaku McFadden told the Washington Examiner.

“A particular, singular individual may not know exactly when they may be leaving, but for the National Guard, we’re staying here through mid-March,” she added. McFadden explained that Guard members who needed to return home for family or work reasons would be allowed to do so.

All of the barbed wire fencing and soldiers milling around everywhere makes Washington look like a militarized zone, as if some sort of occupation were happening right here on American soil.

The logical explanation for all this is the Biden administration really is fearful of an actual attack being carried out by Trump fans. This seems to not be as likely as they probably believe it to be.

Then again, it could be a ploy to make Republicans out to be the bad guys in all of this.

At this point, who knows?