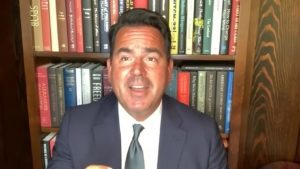 One of California Gov. Gavin Newsom’s aides, Nathan Ballard, has been charged with two counts of domestic violence by Napa County authorities, who allege that the man actually tried to suffocate a child with a pillow during a resort visit back in October.

According to the adult victim’s police statement, Ballard reportedly “had consumed a large amount of alcohol and some marijuana” at the resort before he charged at her and pushed her with both hands into a set of glass doors.

This action caused her to fall and hit the back of her head on the door, before Ballard also stumbled and fell onto the ground, bleeding.

Ballard then allegedly grabbed a pillow from his bed, placed it onto the child victim, and laid on top of the pillow, placing his weight on and “attempting to suffocate” the child who was underneath it.

The adult victim was able to get the child out of the room and then locked herself and both of the kids in a different location.

Ballard was arrested on Oct. 20 and was then able to pay off his $75,000 bail and was then released later on that same day.

He then went on to release a statement saying, “I’ve spent my career in crisis communications fighting on behalf of the wrongfully accused, and now for the first time I really know what it feels like to be in their shoes. I will be exonerated. I love my children more than anything on earth, and we will be reunited.”

Wow. This guy is absolutely disgusting, isn’t he?

Ballard previously served as a spokesperson for the Democratic National Committee, the California Democratic Party, and for Gavin Newsom when he was the mayor of San Francisco.