Nancy Pelosi Says “We Have Never Not Said There Was a Crisis” But Yes, Yes They Did 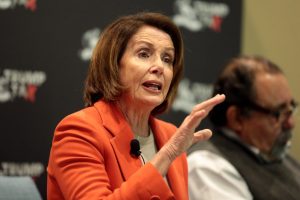 This week, Nancy Pelosi babbled something through her dentures about how she and her party never not said there was a border crisis.

But they did indeed not say there was a crisis.

In fact, I believe the words the Honorable Madam Speaker used was “manufactured crisis” so that’s awfully similar to not saying there was a crisis.

One might say to argue that something is manufactured is to say that thing is not there and so one can only conclude that the Democrats did say there was not a crisis.

“Well, let me just say this. We have never not said that there was a crisis — there is a humanitarian crisis at the border, and some of it provoked by the actions taken by the administration,” Pelosi said during her weekly press conference from the Capitol this week, according to Breitbart.

“What is happening at the border is tragic and we hope to address some of that in the disaster supplemental,” she continued. “And we understand our responsibility to secure our border.”

Yes, that’s right ladies and gentleman, 2019 Nancy Pelosi just said we have a responsibility to secure our border.

I will give you a second to pick your jaw up off the ground so that you can join me in saying to the venerable Speaker…”say WHAT?!”

You’ve got to be frigging kidding me, lady.

This is, let us just say, a slight deviation from her rhetoric, say, like four months ago.

Pelosi’s remarks bear a stark contrast to what the House Speaker and other Democrats have previously said about the situation at the border, referring to it as a “manufactured crisis” by President Donald Trump.

During a joint press conference in January, Pelosi and Senate Minority Leader Chuck Schumer (D-NY) accused the president of using the “backdrop of the Oval Office to manufacture a crisis, stoke fear, and divert attention.”

Further, House Majority Leader Steny Hoyer said of the situation at the Southern border after a visit to El Paso, Texas: “The first, most dramatic thing we found was there is no crisis.”

Call me crazy but it sounds to me like she’s talking out of both sides of her mouth.