Nancy Pelosi Graces the Cover of Time Magazine for the First Time. Here’s Why the Left is Grumpy About It. 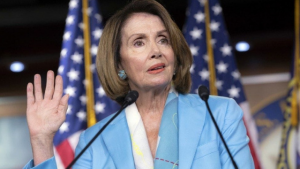 Until now, I was unaware that one’s career in politics is not properly validated until you’ve been on the cover of Time Magazine.

I thought working hard to establish yourself in the public arena, working tirelessly on a campaign, listening to the needs of your constituents and then crafting eloquent hollow promises to fulfill these needs if elected was what established one’s political career.

Despite her many laurels as a Democratic politician, including being the first-ever female Speaker of the House, all that was for naught…until now.

Now, her career is official, her glass ceiling, previously only cracked, has finally been broken:

She’s on the cover of Time.

Aaaand leftists are pissed it took this long.

Remarkable…. today Nancy Pelosi, with her decade-plus in leadership, has scored her first ever Time cover pic.twitter.com/2Aivyqr4Vf

Believe it or not, this marks the first time @NancyPelosi has ever made the cover of a major national newsmagazine. Never happened when she was the first woman speaker. pic.twitter.com/jisG3uBv9T

That it has taken this long for Nancy Pelosi to be put on the cover of Time Magazine says something about the resistance that women in politics still face in having their achievements recognized, writes @ktumulty: https://t.co/h5BibYEYyK

Nan herself has apparently complained about this in the past:

Pelosi got the cover of time magazine for the first time. This is something she’s brought up before. Here’s one instance in 2014 https://t.co/XiVOwpo1kH pic.twitter.com/k7bbneuejI

The Daily Wire isn’t sure exactly why Democrats care about the polarizing Pelosi, who gives Republicans much more hope of securing the House in November than she does Democrats. After all…she’s Nancy Pelosi:

When even President Trump wants Pelosi to stay on board, Democrats should know they need to find a new leader. Fortunately, they haven’t, and now she has a profile in Time magazine, which begins in the most Nancy Pelosi of ways as she comments on why she prefers ice cream on a cold winter’s morning.

“Nancy Pelosi stopped caring about what people think of her a long time ago, so she has no qualms about eating ice cream for breakfast with a stranger,” reads the first sentence. “Dark chocolate, two scoops, waffle cone.”

It was a freezing January morning in New York.

“You know what’s good about ice cream in this weather?” Pelosi reportedly said. “It doesn’t melt down your arm while you’re eating it.”

We love you, Pelosi. Please stay in the House for as long as you can muster. Run for president some day. Break that glass ceiling. Let the history books show that YOU were the trailblazer.

It seems the Time cover may be perfectly timed.