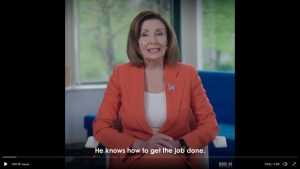 In a move that puts the hypocrisy of the left on full display, House Speaker Nancy Pelosi has backed former Vice President Joe Biden for the 2020 election, despite the fact he’s currently facing some rather serious sexual assault allegations.

Guess that whole #MeToo shenanigans we were exposed to back when Brett Kavanaugh was being appointed to the Supreme Court is only a cause liberals stand up for when the individual they are looking to punish is a conservative.

So much for standing for justice and victim’s rights, eh?

“I’m proud to endorse Joe Biden for president of the United States because he will be an extraordinary president,” Pelosi said in the video. “He knows how to get the job done.”

.@JoeBiden has fought for our health care, for our families & for our children’s future.

To his work, Joe brings values & integrity. He is a voice of reason & resilience who will fight #ForThePeople. Today, I am proud to endorse him for President of the United States. -NP pic.twitter.com/Qdc9vTgWHP

“Joe Biden brings values and integrity to work every day, because he never forgets his roots,” Pelosi said. “Now more than ever we need a forward-looking, battle-tested leader who will fight for the people.”

When Pelosi was asked by Fox News about the accusations facing Biden, they were referred by her office to an April 17 video in which she stated that she was satisfied with Biden’s denial of the events that allegedly transpired.

“Yes, I am. I am very much involved in this issue. I always want to give the opportunity that women deserve to be heard. I am satisfied with his answer, yes,” Pelosi says in the video.

You can get away with anything when you believe the talking points put out by the Democratic Party and are willing to go along with the program. Scary, but true.

Biden should be fully investigated due to these allegations to determine if there’s enough evidence to prove it actually happened. If it did, he should be disqualified from running for president. It’s that simple. We should all be equal under the law.