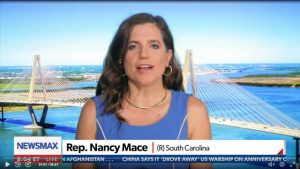 According to Rep. Nancy Mace, major cities like Chicago that have strict gun control laws on the books do not see a drop in violent crime numbers and that’s a serious issue that needs to be addressed.

“It’s interesting because I’ve heard numbers such as in New York, (where) they want to spend $140 million on gun control,” the South Carolina Republican stated during a chat she had on the issue with the folks over at Newsmax’s “Wake Up America.” “Look at a place like Chicago where just a week ago last weekend there were 108 shootings, a place where Mayor Lori Lightfoot wanted to defund the police and is now begging for federal funding from the federal government and the Biden administration.”

These comments come as President Joe Biden meets with local law enforcement leaders, elected officials, and an expert on violence intervention at the White House to try and drum up some support for his plans to try and reduce gun violence.

“The problem with what the Democrats are selling right now is they’re throwing everything at the wall because they’re projecting,” she went on to say. “There are many Democrats that ran on defunding the police.”

“They’ve got a real problem on their hands, particularly headed into the 2022 midterm election cycle,” Mace said.

Mace added that she has her concealed carry permit in her home state, as she has been carrying a weapon since vandals hit her house about a month ago, and she’s “about halfway through” obtaining one for Washington, D.C. as well so she can carry a gun there too.

“Sometimes if you have to look over your shoulder, you don’t know what’s going to happen next, and I have to take these threats seriously, and I do,” Mace then said. “Unfortunately this is where we are in this country. And on August 15, South Carolina will have open carry.”

Former President Donald Trump actually addressed the topic of gun violence while delivering a speech at the Conservative Political Action Conference on Sunday, stating that it is reaching “epidemic” levels in our nation’s cities. Mace concurred.