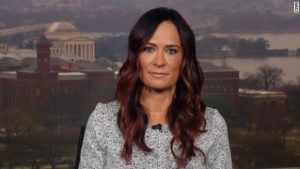 Just hours after President Trump made the announcement that Press Secretary Sarah Sanders would be stepping down from position at the end of June, the name of her possible replacement began surfacing, and boy, oh boy is it ever a solid choice.

If liberals hated Sanders, they most certainly aren’t going to like this individual.

So who is up for possible consideration? Stephanie Grisham, the White House Director of Communications for First Lady Melania Trump.

In December, The Washington Post noted that Grisham has grown to become “one of the more powerful figures in the ever-evolving Trump White House” and referred to Grisham as “Melania Trump’s enforcer.”

A source close to the White House told The Daily Wire on Thursday night Grisham “has proven herself to be a stone-cold killer” and that “no one else comes close” to being able to match Grisham in her ability to command problems that arise.

The source said that Grisham was a “risk-free move for the administration in the run-up to perhaps the most important election in American history.”

“Grisham is pure Trump,” the source said. “She holds down the East Wing with ease and has no loyalties to any faction within the Republican Party. Members of the first family love her and know that she is fiercely dedicated and loyal.”

Another source, a Trump ally close to the President and the Trump family, told The Daily Wire: “Stephanie Grisham is a favorite of Trump loyalists, many in the national press corps, and most important, the Trump family. The First Lady loves Stephanie’s tenacity and loyalty, and President Trump has remarked that he respects Stephanie’s ability to stay cool under pressure and manage the toughest of news cycles. Stephanie might not be the first name that comes to mind for this role, but she’s the one person inside or outside the building who everyone nods their head and says, ‘She’d be great.'”

If you listen closely you can hear the cries and wails of the Democrats, both in politics and in the media, as they realize they’re going to be pushed even harder by the next person who takes up this position.

This seems like a strong choice for Trump, as he definitely needs someone who will be there to defend him when the media begins their ridiculous onslaught of nonsense attacks against him and the administration.

If the leftists journalists out there thought about celebrating Sanders stepping down, they might want to reconsider the party hats.