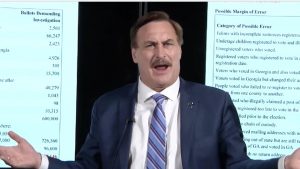 MyPillow CEO Mike Lindell took an opportunity to speak with Newsmax this week where he came down hard on Fox News for rejecting advertising related to his new social media platform, FrankSpeech.Com, but went on to note that several other media outlets, including two national broadcast networks, along with Newsmax, did.

This, Lindell said, demonstrates that Fox wants to censor his platform.

“Where does it end with the censorship?” Lindell stated on Tuesday during an interview on “The Chris Salcedo Show.” “We have [Twitter CEO] Jack Dorsey and [Facebook CEO] Mark Zuckerberg and what those guys have done in Google. … These guys have exposed themselves.”

But Lindell said he will use Frank Speech to prevent other social media platforms, and even Fox News, from shutting down voices of conservatives or others who want to say things that those in control of those platforms don’t want said.

“We’re not going to let them stop us from hearing our voice, and that’s why you have great platforms being built,” he went on to say. “It’s like the perfect timing in history. You have all these people that were censored on YouTube and Vimeo and those places where they relied on that for their income and Facebook. And Twitter.”

Many of those who have been kicked off those platforms have moved to Frank Speech, where they can broadcast their message and continue to earn a living, Lindell said.

“Not only what they want to talk about, but … they don’t have to worry about losing that platform,” he continued.

Lindell had to buy his own servers to avoid the problems other conservative platforms have seen, such as Parler, which was temporarily forced offline when Amazon pulled it from its cloud computing services after the Jan. 6 storming of the U.S Capitol building.

“This has to be so protective now to get a safe platform,” the MyPillow CEO said. “But shame on Fox. I can’t say that enough: Shame on Fox. They won’t even give me an ad to advertise coming over to Frank Speech.”

“Fox shouldn’t even be a weather channel because if they were, I would be afraid they wouldn’t report an oncoming storm,” Lindell added. “They have all these restrictions of what they let people talk about. And that’s what’s hurting our country, when journalists can’t be journalists and all this censorship going on. It’s just disgusting.”