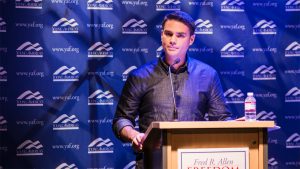 Socialism is an ill-fated system.

But in case you’re having a rough day, are burned out on all the crazies out there, or need to stock up on arguments to use against stupid people on Twitter, here’s Ben Shapiro’s recent annihilation of socialism, which he executed in under four minutes.

At a recent event put on by Young America’s Foundation, Shapiro engaged with a self-described socialist at George Washington University.

“Let’s say you own a pencil factory; I’m a worker in that pencil factory,” the student began (full clip below.) “You can have all the machinery, you can buy all the raw materials you want, but without me, and presumably many others like me, to assemble the pencils, all you would have is a pile of wood, yellow paint, graphite, rubber, and aluminum. That wouldn’t be worth anything. And that is worth less than the pencil when you try to sell it. And yet all of that value added by labor, apart from the wages you give me — which, if we’re being honest, there is a major power imbalance in our ability to negotiate that—”

“If all that putting the pencil together requires is basic use of your prefrontal cortex,” Shapiro interjected, “then, yes, your labor is alienable at lower rates than if you were a doctor. That’s not the fault of the person who owns the machinery.”

“But if you didn’t have workers like me at your pencil factory, and you were just one man—” the student replied.

“But I do,” Shapiro retorts. “I have millions of people who are willing to do that voluntarily for me.”

The student later tries to sum up his point more concisely: “If you were just one person trying to assemble a pencil. You’re not going to get very far. You need workers,” he says. “Capital needs labor infinitely more than labor needs capital. That’s why you have labor cooperatives, where the workers are the ones—”

“I fundamentally disagree on the distinction between capital and labor,” says Shapiro. “Capital is just a term for money. If you’re talking about money, money does not grow from the ground. Money only has value because it was traded for labor at one point, or the products of labor. So, if I take my money and I buy machinery, I have invested my labor in doing that because I didn’t get the money from nowhere. Even if I got it from my parents, my parents didn’t get it from nowhere. The people who built the machines required me to trade something of value to them in order for me to obtain the machines. The people who invented the machines required people to pay them in order to get the patent for that machine so they can build the machine.”

Shapiro goes on to note that the biggest “problem” he sees in the student’s idea of a “cooperative” system: “The problem that I’m seeing in what you’re saying is you’ve still failed — if what you’re talking about is a system of volunteerism — you still have not named one area in which we disagree, and yet you’re telling me that you’re a socialist and I’m a free-marketer. One of us has got this wildly wrong — and I’m pretty sure it’s not me.”

The student then offers his perspective on the differences between the two political systems: “The differentiation I and many others like me draw between socialism and capitalism is that, under capitalism, when you as the owner of the factory, you give me a wage … all the additional profit — made from selling the pencils or whatever good you produce — above what is reinvested into the company ultimately goes to you or the investors who own shares in the means of production. Under socialism, those people [who own shares in the company] are the workers. And the example I give again is cooperative enterprise.”

Shapiro rejects his final premise: “No, those are people who are investing the risk,” he says of shareholders. “So if they carry the risk, then they get the benefit. The owner of the factory carries the risk; therefore, he gets the benefit.”

Shapiro then applies the student’s own reasoning to his pencil factory scenario: “The workers in the company you mentioned, if that company were to go bankrupt, they would carry the risk as well as the benefit. If that company goes bankrupt, and this guy has to pay off all of his debts, the worker may lose his job, but he’s not the one who’s going to incur the debt of having gone bankrupt. If you incur risk, then you’re the one who pays the downside. The worker does not pay the downside. It is the investor who pays the downside, who invested in all the machinery, who sunk millions of dollars into making your labor productive. Because guess what your labor is without that machinery? Gunk. Nothing. You don’t have the pencils to put together — you don’t got the wood, you don’t got the paint, you don’t got the rubber, you don’t got the metal, you’ve got nothing. You’re sitting there, standing outside twiddling your thumbs.”

“Who do you think put more in?” Shapiro asks. “The guy who spent millions of dollars buying all the machinery, leasing the place, making sure there was a management structure, doing the LLC formation, making sure all the tax code was in compliance — or you because you can stick a piece of graphite into a piece of wood?”

THE BEN WE LOVE: "I fundamentally disagree…"@BenShapiro is on 🔥🔥🔥 in this MUST-SEE new video ⤵️@realDailyWire pic.twitter.com/ctYdolwPfB