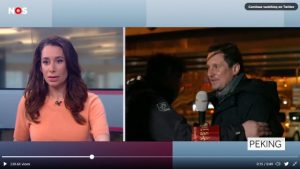 A European journalist who was in China covering the 2022 Beijing Winter Olympics was dragged away by Chinese law enforcement right in the middle of a live broadcast, in a further display of media suppression from the Chinese Communist Party.

Asia correspondent for Dutch broadcast company NOS, Sjoerd den Daas, was yanked away from in front of the camera on Friday by what looked like a Chinese security guard wearing some kind of red armband. The guard seemed to be yelling at den Daas. The broadcast ended preemptively according to footage captured of the incident.

“Our correspondent [den Daas] was pulled away from the camera by security guards at 12:00 pm live in the NOS Journal,” the outlet posted on Twitter Friday. “Unfortunately, this is increasingly becoming a daily reality for journalists in China. He is fine and was able to finish his story a few minutes later.”

Based on the footage that was captured, it’s unclear what exactly den Daas might have done to cause the Chinese officials to intervene during his report.

NOS Editor-in-Chief Marcel Gelauff told Dutch news outlet Algemeen Dagblad that the clip was a “painful illustration” of how international media outlets were being treated in China.

Journalists have had to take extreme caution while covering the Beijing Winter Olympics, which began Friday. Several reporters have brought burner phones due to security concerns. China has also isolated several foreign reporters and athletes in a bubble, keeping them away from the general public for quarantine purposes, mandating they use health monitoring apps, and subjecting them to daily COVID-19 tests.

Foreign journalists have faced increasing pressure from Chinese officials, according to a January report released by the Foreign Correspondents’ Club of China. Journalists endured online trolling, physical assaults, and visa denials, according to the survey.

Watch Bill Maher Asks Some Forbidden Questions About The Alphabet Lobby
May 22nd, 2022 The Lid