MUST SEE: Students In Nevada Cheer After Hearing Mask Mandate Has Been Repealed 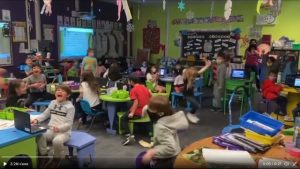 An elementary school teacher got video footage of her students reacting to the news that mask mandates had been repealed and was then shared to social media.

The kids in the video went wild after hearing they were finally free of having to wear masks all day in the classroom, and it’s honestly a joy to watch them celebrate.

The video of a Clark County School District class was uploaded to social media Thursday after the repeal was announced. It was quickly reposted by several other users, who appreciated the children’s evident joy at the news. “Starting tomorrow we don’t have to wear masks anymore,” an unknown female said, followed by cheers and dancing from excited students.

Stop what you’re doing and watch this.

Kids at a Las Vegas elementary school burst out into cheers after learning they no longer have to wear a mask to school pic.twitter.com/xIuHgFtmHo

“Is anybody excited?” the woman in the video prompted the students, who, once again, burst out in cheers of relief.

The school removed the district mandate after Gov. Steve Sisolak repealed the statewide mandate Thursday. The video was likely filmed shortly after the district released a statement on the policy. Governors of Connecticut, Delaware, New Jersey, and Oregon also announced the near end of mask mandates in their states.

CCSD Statement regarding Governor Sisolak’s repeal of the mask mandate

Social media reacted to the video, with many celebrating along with the children virtually. “Their joy is so uplifting!” wrote former Trump campaign adviser Steve Cortes. “Simultaneously, enraged that children suffered because of the wide scale neurosis of the Left. Time for political payback.”

Their joy is so uplifting!

Simultaneously, enraged that children suffered because of the wide scale neurosis of the Left. Time for political payback. https://t.co/pfn5XDmHiP

“Others weren’t quite as impressed by the video. Podcast host Matt Binder wrote, ‘As a parent, I can confirm that kids will react this way about most anything when you tell them to,'” the report said.

as a parent, i can confirm that kids will react this way about most anything when you tell them to https://t.co/q8UKk99gwL

I’m all for no masks in school, but it kind of ruins the authenticity when you tell the kids how to react before you start recording. https://t.co/NZiRSDlOef

Courtney Holland, the vice chair and national committeewoman for Nevada Young Republicans, posted the video, which, as of 11 a.m. on Friday had 2.4 million views.