MUST SEE: Maskless Man Gets Yanked Out Of School Board Meeting By Security Guard 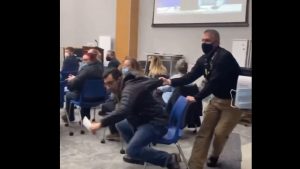 A security guard decided to abuse his authority and yank a maskless man who was sitting quietly during a school board meeting in Webster, New York on Tuesday evening allegedly due to the fact the he was not wearing a mask.

Another woman at the meeting then said to the security guard, “Do you put your hands on our children, too?”

“Then two security guards, including the man who tipped the man out of the chair, push the man out of a back door as the man tries to resist his exit. People are heard yelling, ‘What are you doing?’ and ‘Do you do that to the kids?'”

The footage then shows a police officer calmly walking out the door of the room to where the man has been physically removed.

In a video that was posted on a Facebook page called “ROC for Educational Freedom,” a woman who as actually in attendance at the meeting went on to claim the man actually had to go to an urgent care following the situation.

“She also explained that the maskless man was approached by the security guard while a student was in front speaking. The school board, she said, always brings up children who ‘love the school’ and ‘love the superintendent’ to speak when there is a hot issue parents want to voice concern over, adding that the kids who speak are clearly ‘hand selected,'” the Daily Wire reported.