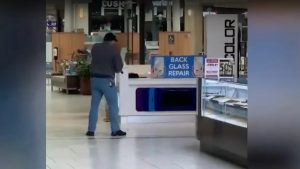 A legally armed man in the state of Pennsylvania saved lives earlier in the week by exercising the Second Amendment right to bear arms and bringing a mall shooting to an end.

Folks, this is one of many reasons we have the Second Amendment. Don’t believe the lies of the liberal mainstream media that tell you good guys with guns don’t stop mass shootings. This right here is proof that they do.

A press release that was put out by the Lancaster Bureau of Police went on to provide all the details of what happened in the scary moments just before the unnamed bystander intervened.

According to the release, an unnamed 16-year-old male got into a fight with another person, then pulled a gun and fired multiple shots.

At that point in the altercation, several individuals jumped in and started a struggle for possession of the weapon. The legally armed bystander got involved and was able to hit the teen suspect and send him to the ground.

The release then said, “An uninvolved bystander was in a nearby store and heard the first set of gunshots. This bystander was armed with their own, legally possessed firearm.”

“The armed bystander then engaged the subjects fighting over the gun and fired shots, striking one of the subjects,” the release went on to add. “The struggled [sic] ended and the bystander waited at the scene until officers from the Lancaster City Police and Park City Security arrived and took control of the scene. The bystander was interviewed and released. The district attorney will be responsible for determining if the actions of the bystander were lawful and justified, upon the completion of the investigation.”

Three males and one female, including the teenage suspect, were treated for non-life-threatening gunshot wounds sustained in the attack.

Witness Hana Ali said that the Good Samaritan’s presence likely made all the difference.

“I don’t know what he did before, but at that moment, he is the one that should be — he is a hero,” Ali, an Iraqi native, recounted. “It reminds me of the Desert Storm war when I was there. It was awful. The sounds of shooting, it’s really bringing things back to you. It’s so terrifying.”

The Lancaster County District Attorney’s Office is investigating the the incident, including the bystander’s actions. Formal charges against the 16-year-old suspect are pending. Video captured the aftermath of the shooting.