MSNBC Will Most Likely Not Fire Joy Reid. Here’s Why. 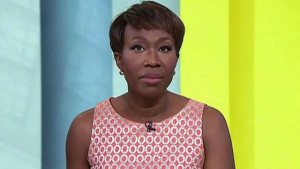 If you haven’t been aware of the nosedive her career has taken as of late, let me inform you. Joy Reid, a progressive MSNBC pundit, wrote a blog in the early 2000s that was full of all kinds of crazy stuff, much of which make her a complete and total embarrassment to the left.

From homophobia to anti-immigration to anti-semitism to superimposing John McCain’s head on the Virgina tech shooter, she’s attracted quite a bit of criticism–and used a whole lot of pathetic excuses.

She’s done everything from try to blame hackers to claiming she didn’t remember creating the posts (seriously) to finally settling, in a week full of hateful rants and apologies from the likes of Roseanne Barr and Samantha Bee, on a “heartfelt” apology for her controversial posts.

“There are things I deeply regret and am embarrassed by, things I would have said differently and issues where my position has changed,” she said in a statement this week, explaining her own evolution into full-blown, kosher progressivism.

After the left got Roseanne’s head, a lot of conservatives are still out for blood, and have been calling for her to be fired. They’re not alone–even people on her own side have called for her to be fired after anti-gay rants were uncovered.

But Warren Henry over at The Federalist explains that, despite her obvious lies, she will most likely get to keep her job:

That Reid appears to be a liar (to herself at a minimum) should be a serious issue, particularly in journalism, particularly when the president of the United States has made a habit of denouncing “fake news.” There are reports that some MSNBC staffers recognize the problem, although the dissidents apparently lack authority in the matter…

The questions the Reid kerfuffle raises, however, extend beyond ethics in journalism to shed light on the current state of the progressive Left. The prior installments in this story—involving homophobic blog posts—reflected the seamy underbelly of the politics of “alliances.” The Left is remarkably tolerant of bigots, misogynists, and those who celebrate them, so long as that tolerance helps advance the progressive agenda of the current moment.

At the end of the day, the left doesn’t care about actual values. They care about power, and about pushing their agenda, by whatever means necessary. They’ll forgive Reid all day of her sins, as long as they can keep blaming Trump for racism everywhere, right?

The modus operandi of the Left is to continue pushing the Overton Window on its issues as far as it can, as fast as it can. More mainstream Democrats and liberals trying to maintain political viability in a given moment often cannot go as far.

For example, in 2008, the Left had to tolerate Obama and Clinton not supporting same-sex marriage. Both were allowed to “evolve,” just as Reid now claims she has. She lied to avoid excommunication, but the Left must be willing to engage in a constant, vaguely Maoist cycle of political re-education and contrition. Modern progressivism is an ouroboros, but the creature cannot consume too much of its own tail at a time, lest it kill itself.

Exposing bigotry within their own parties just gives leftists an opportunity to virtue signal, to proudly display the ideological evolution they want all Americans to go through. This is the message: if Reid was a bigot and changed to our side, than anyone can! Join us!