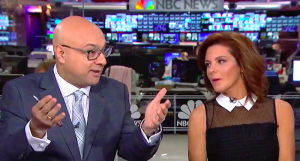 Those Founding Fathers were so selfish.

They just wanted to get out of paying taxes, right? I mean, what selfish person wouldn’t pour all their energy for years into a seemingly hopeless battle against the largest military power in human history just to save a little money on their tea?

So go figure today’s conservatives are no different, as these clearly balanced and sensible personalities on MSNBC pointed out this week.

They just want to make abortion illegal, guarantee the right to bear arms for all American citizens, and see a flourishing economy for themselves. What selfish person wouldn’t?

“MSNBC Live” hosts Stephanie Ruhle and Ali Velshi accused voters who continue to support President Donald Trump of being selfish, saying it is solely based on their own pocket books or their stubborn pro-life or pro-Second Amendment positions.

The two MSNBC personalities made the argument during a segment with fierce Trump critic Tom Steyer on Thursday.

The California billionaire has been calling for Trump’s impeachment from early in his presidency and has spent millions in television ads promoting that effort.

Ruhle said to Steyer, “While we could find or do find the president’s constant lying or lawlessness or reprehensible behavior morally unacceptable, a lot of people vote pretty selfishly, and they say, ‘What’s going to give me more money in my pockets?’”

This is the narrative on the left. The policies they vote for, that restrict others from keeping their own money, make it illegal to own a gun to defend their families and maintain a healthy balance of power between the government and the people and violate the God-given right to life of unborn citizens, as the compassionate, selfless, ethical policies.

And those of you that want liberty and prosperity for all are just a bunch of greedy bastards.

All this pontificating about selfishness, by the way, while talking to a billionare.

If that doesn’t adequately sum up the current state of the left, I don’t know what does.