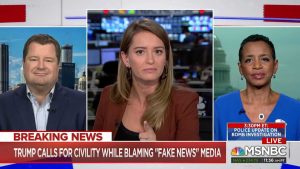 Right now, at least as of Friday morning, October 26th, it’s important to stress when we talk about these homemade bombs that were intercepted on their way to several prominent Democrats (who don’t open their own mail…just saying)  that we don’t, at this point, know anything about who manufactured or sent the devices.

What we do know is that we’re already knee-deep in the left’s spun narrative, and to be honest, they’re not really helping the case that, while of course completely unproven, perhaps this is yet another of the Democrat’s political ploys to demonize Republicans.

Just as, if Dr. Christine Blasey Ford was telling the truth about Brett Kavanaugh, the Democrats sure made it look like she was being used as a political ploy, if a crazed Trump fan really did send these bombs to Soros, the Clintons, the Obamas, Biden, and Robert DeNiro, the Democrats are sure making it appear to be politically expedient for their narrative.

We just addressed at length some examples of people on the left saying, and actually doing, very violent things, while the media continues to characterize Trump as violent for chanting “lock her up” about Hillary Clinton or calling the (FAKE) news media “the enemy of the people.”

Since the pipe bombs were discovered, they’ve doubled-down on this narrative, and don’t you dare bring up examples of actual violence from the left:

MSNBC’s Katy Tur exploded at conservative talk radio host Erick Erickson on Thursday after Erickson suggested that people on both ends of the political spectrum needed to tone down the inflammatory political rhetoric.

“Erick, in the past you’ve been pretty critical of the president,” Tur said. “You’ve condemned him for saying certain things. Why not push him for forcefully right now to be a unifier instead of a divider?”

After mentioning that President Donald Trump should not go after the media as much as he does, Erickson reminded Tur about the violent political rhetoric coming from the political Left.

“I also think there are folks on the other side who need to tamp down on the rhetoric as well,” Erickson said. We had ricin attacks against Susan Collins and Ted Cruz last week and protesters chasing people out of restaurants. I think both sides need to calm down, which is one reason I think it’s not really helpful right now is who started it.”