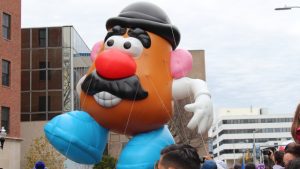 Well guys, there’s truly nothing sacred in this world that liberals won’t put their grubby paws on and destroy. Nothing is safe from the grasp of liberal lunacy. Not even Mr. Potato Head.

Or should we just call the dang thing “Potato Head” now that he’s officially no longer a mister?

That’s right. Mr. Potato Head is going gender neutral. Thanks for that, Mr. Liberal. Thanks a lot.

“It’s a potato,” said Ali Mierzejewski, editor in chief at toy review site The Toy Insider. “But kids like to see themselves in the toys they are playing with.”

As part of the rebranding, Hasbro will release a new Potato Head playset this fall that will let kids create their own type of families, including two moms or two dads.

The Mr. and Mrs. Potato Head characters will live on in some form, Hasbro said, but didn’t provide details. Both have appeared in the “Toy Story” movies.

Dropping the “Mr.” from its name could encourage other companies to stop assigning genders to its toys, a trend that has already been happening, said Mierzejewski. Barbie maker Mattel released a gender-neutral doll line in 2019. But Mr. Potato Head is one of the biggest brands to do so.

“It’s setting this new standard,” Mierzejewski went on to say.

GLAAD, which is an advocacy group for the LGBTQ crowd is, of course, thrilled to death with the choice to make the toy gender neutral.

“Hasbro is helping kids to simply see toys as toys, which encourages them to be their authentic selves outside of the pressures of traditional gender norms,” Rich Ferraro, GLADD Chief Communications Officer said.

I just want off this planet, folks. Like right now.