Mr. Bean Takes a Stand for Free Speech in the UK 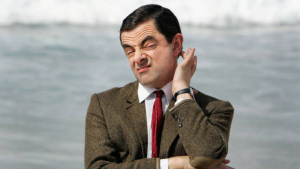 You know things are bad in the UK when Mr. Bean needs to step in and speak common sense.

A British politician recently made a joke about burkas, which, if you’ve been following the way things are going in the UK, it won’t surprise you to learn made the entire nation collapse into a Cat-5 snowflake meltdown which was quickly answered with a heavy dose of fascism.

That’s pretty much the way things are going across the pond these days.

Sky News has the story:

Boris Johnson has been defended by comedian Rowan Atkinson following his recent comments about burkas.

The actor, best known for playing Mr Bean and Blackadder, described the remarks as funny.

The Uxbridge MP compared women who wear the burka to “bank robbers” and questioned why they would “go around looking like letter boxes”.

Atkinson wrote to The Times, saying: “As a lifelong beneficiary of the freedom to make jokes about religion, I do think that Boris Johnson’s joke about wearers of the burka resembling letterboxes is a pretty good one.

“All jokes about religion cause offence, so it’s pointless apologising for them.

“You should really only apologise for a bad joke. On that basis, no apology is required.”

In reality, it’s pretty appropriate that one of the UK’s time-honored comedians would step in to remind the nation of their rich history of ridiculous and utterly politically incorrect humor.

Can you imagine Monty Python attempting to make their classic films today? It absolutely couldn’t be done.