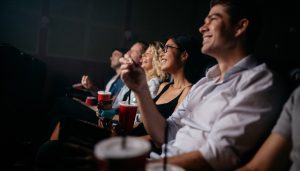 Movie theaters are an industry nearly crushed to death by the panic surrounding lockdown measures for the coronavirus this year, and many of them are attempting to open back up for business now that things are starting to get better.

However, many film critics are refusing to go out and review movies because they don’t want to encourage folks to go to the theater and potentially expose themselves to COVID-19.

Disney is releasing a new Marvel film, “The New Mutants,” this week, but the studio decided not to make “screening links available or offer socially-distanced press screenings to film critics,” according to reports from IndieWire. They have decided to only do public screening.

This is setting off all the paranoid folk who simply want to stay lockdown for the rest of their natural lives. See for yourself.

A.V. Club film critic A.A. Dowd explained why in a Tuesday essay headlined, “The New Mutants finally opens this week. Here’s why we’re not reviewing it.”

A few days ago, we reached out to Disney and were informed by representatives of the studio that they would not be providing press with either an advance screening of the film or a digital review link. In other words, the only way critics will be able to see The New Mutants is if they buy a ticket and go to a theater, just like everyone else. In normal times, that’s exactly what we’d do: Studios will sometimes decline to screen a movie in advance of its public premiere—often, it must be said, when they’re afraid that reviews will be negative enough to hurt attendance. (Maybe The New Mutants is a train wreck. Or maybe Disney just thinks it is.)

But these are not normal times. Last week, we published an interview with scientific experts on the dangers of going to the movies now, during a pandemic that is in no way under control. They did not mince words: There’s a very good chance you could get sick. And that’s a risk The A.V. Club will not be taking to review a movie, any movie, even one that will satisfy our burning curiosity about a long-delayed comic-book blockbuster that sounds more like A Nightmare On Elm Street III: The Dream Warriors than First Class. We are, in fact, adopting the official policy of only reviewing films our writers can safely watch, whether in a socially distanced press screening or with a digital screener. And yes, that applies to all our writers, even those willing to take the risk for an assignment, because we’re not willing to monetize that risk, either.

RogerEbert.Com editor Brian Tallerico responded to the piece via Twitter, noting they would also not be reviewing the film.

We also will not have a review of The New Mutants because there’s no safe way to do so. https://t.co/U3BzQ5uaPU

Folks, this fear mongering nonsense has got to stop. Businesses need customers. The coronavirus isn’t going anywhere. It’s going to be around for the rest of our lives. We’re never going to adapt to it if we keep hiding in our basements and bunkers.

Time to venture out into the world and live life.