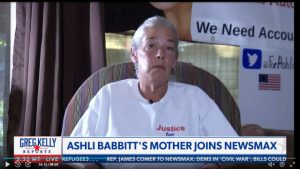 The mother of Ashli Babbitt, the woman and former Air Force veteran who was shot and killed by U.S. Capitol Police back on January 6, referred to her daughter’s death as a murder and stated it was outrageous that the Defense Department didn’t allow Babbitt to be buried with the military honors that are usually accorded to all honorably discharged personnel.

Micki Witthoeft went on to reveal that she was told by an Air Force colonel that Babbitt, who was 35 when she died, would be denied a military funeral because of the woman’s participation in the Jan. 6 protests at the Capitol.

”Somebody from the Air Force decided that because of her participation in Jan. 6, she would not be eligible. It doesn’t seem fair,” Witthoeft stated during an interview on Newsmax‘s ”Greg Kelly Reports” on Thursday. ”It’s just an outrage. It’s an outrage. Like so many other things.”

”You know, my daughter was a proud patriot protesting and not an insurrectionist. And I just think that narrative should cease to be pushed forward for any of our political prisoners. My daughter especially, included,” she added.

A recording at the Air Force’s public affairs office at the Pentagon said the phone number could not accept messages.

Babbitt was shot and killed by Capitol Police Lt. Michael Byrd as she and others were attempting to enter an inner chamber of the Capitol. Reports indicated the unarmed Babbitt was crawling through a broken window next to a door. The Department of Justice and the Metropolitan Police Department of Washington both declined to bring charges in the case.

Regardless, Witthoeft, wearing a white T-shirt with the words ”Justice for Ashli,” dismissed the official findings.

”My daughter was funny, vivacious, full of life. I miss her every day,” she explained. ”Not only did I lose a daughter, this country lost a proud patriot that day.”

Witthoeft then went on to thank Rep. Paul Gosar, an Arizona Republican, and former President Donald Trump, for helping to raise awareness of what happened to her daughter, going on to say that at least some justice would help provide freedom for the individuals who are currently imprisoned for their participation in the protest.

”People ask me what justice for Ashli looks like. And I would say, you know, reform to the Capitol Police. I would like to say changes in the laws, changes in the way we vote. You know, my daughter died for a cause she believed in,” Witthoeft went on to say before she needed a pause to collect herself.

”My daughter believed enough in the fact that the election was stolen to go to Washington, D.C., with so many other patriots that are there that are still suffering,” she said, adding, ”And I feel like they tried to squash a movement that day, but I feel like they’ve made my daughter’s voice louder. But there are people still in jail suffering, and everybody in this country knows that that’s not right. Some of them are in jail for a little more than carrying a flag.”