More Dirt on Beto Surfaces: He Literally Ate Dirt After Losing to Ted Cruz (No, Really) 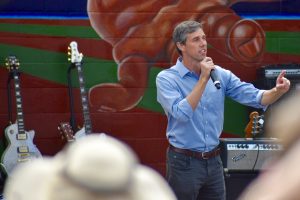 This dude just keeps getting weirder and weirdo.

Robert Francis “Beto” O’Rourke announced his run for president last week and boy, has it been a roller coaster ride of a campaign so far as bizarre aspects of the most Irish Mexican presidential candidate in history keep hitting the headlines.

Along with very some uncomfortably graphic high school “poetry” that has been circling was the explosive story that an AP reporter sat on a story about Beto’s history in a hacking group as a teenager.

(In case you were wondering, his ultra-cool hacker name was “Psychadellic Warlord.”)

Fortunately, all this has taken a little attention off of his pesky little drunk driving record and the fact that he’s lied about fleeing the scene after crashing his vehicle blackout drunk.

Oh, there was also the whole murder fantasy story he wrote about driving children over with his vehicle out of jealousy, which was very twisted and weird.

This dude is definitely a trip.

The scoop is, from the Washington Post, that the distraught Beto did some traveling in the days after he lost to Sen. Ted Cruz (R-TX) in last year’s closely-watched midterms, and found some dirt to eat to console himself. I’m sorry, to “regenerate.”

Whatever post-defeat sadness Amy felt, she was able to kick quickly; she’s always been the stable one. Beto, on the other hand, more prone to higher highs and lower lows, was in a “funk.” In January, Beto hit the road, much as his father had done before him, and drew energy from the people he met, and — on one stop in New Mexico he didn’t write about in his blog — by eating New Mexican dirt said to have regenerative powers. (He brought some home for the family to eat, too.)

What’s he going to have to eat if he ends up losing to Trump, who lost to Ted Cruz? A boulder?