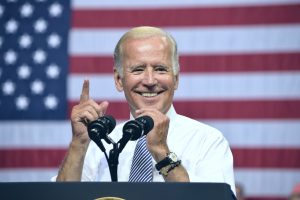 It’s hard to keep up with every errant word or creepy touch that comes from Crazy Uncle Joe Biden. Between him and the Controversy Generator from the Bronx, a writer can barely rest a minute without having a new faux-pas to cover.

Over the weekend, Biden demonstrated once more his sheer ineptitude and inability to function without seamless coaching from someone more in control of their faculties. However, whichever miserable soul has the job of keeping Uncle Joe from saying or touching something or someone inappropriately must be asleep at the wheel, ’cause the dude just keeps rolling.

Right after recovering from his epic “poor kids are just as smart as white kids” oopsie, referring to Theresa May as Margaret Thatcher, and boldly declaring that Democrats “choose truth over facts,” Biden mistakenly recalled meeting with the teen survivors of the Parkland, Florida school shooting during his time as Vice President.

Except, you know, that the shooting happened in 2018 and Joe Biden ain’t Mike Pence.

“I watched what happened when the kids from Parkland marched up to – and I met with them, and then they went off up on the hill when I was Vice President,” Biden said.

CNN notes that Biden the erroneous statement while talking to reporters, saying: “Those kids in Parkland came up to see me when I was vice president.”

Joe Biden thinks he was still in the Obama White House as Vice President in 2018:

"I watched what happened when the kids from Parkland marched … when I was Vice President" pic.twitter.com/sOLWTYv2hD

And, a run-down of Biden blunders wouldn’t be complete without the latest incident of the dude man-handling a woman out in public. With that, here’s The Blaze:

Democratic presidential frontrunner Joe Biden expressed his frustration toward an Iowa college student in front of a crowd of onlookers on Friday, grabbing her by the arm after she pressed him to explain his answer to a question about gender.

Biden was approached by the student — a field staffer for Turning Point USA — who asked the former vice president, “How many genders are there?”

“Pardon me?” Biden replied, before being asked the question a second time. “There are at least three,” he responded.

Undeterred, the student pressed, “What are they?”

With that, the 2020 White House hopeful told the student, “Don’t play games with me kid,” before reaching out, grabbing her arm, and saying, “By the way, the first to come out for marriage was me,” presumably referring to supporting the legalization of gay marriage.

My team just forwarded this video to me

Watch former Vice President Biden forcefully grab one of our young field staffers at yesterday’s Iowa State Fair after she asked him how many genders there are pic.twitter.com/1qmpJxJlzO

Oh my heck, y’all. This dude needs to be in a soft room.