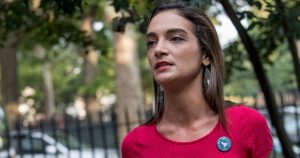 But the grand stories she has woven about her past make Ocasio-Cortez, who greatly exaggerated her supposedly impoverished upbringing on her campaign bio page, look like a girl scout.

Where Ocasio-Cortez claimed to have grown up in Queens, but really grew up in an affluent suburb north of the city, Salazar, who was born a Christian in Florida with hundreds of thousands of dollars to her name in a trust fund, originally claimed she was a Columbian-born Jewish woman raised by desperately poor parents.

That’s a bit much.

But if that isn’t enough to convince you the woman is a crazy person, more weird facts about her past keep coming up, and strung together, they are not convincing that she is remotely sane.

Salazar, 27, faced criticism for saying she was an immigrant from Colombia who struggled financially when she was actually born in Florida and had hundreds of thousands of dollars in a trust fund. She was scrutinized, too, over a political and religious conversion during her years at Columbia University, where she transformed from a Republican, anti-abortion Christian to a hard-left, Jewish Democrat. One group revoked its endorsement after learning Salazar hadn’t graduated from Columbia, as she said on its survey.

Sidenote: how do you “inadvertently misrepresent” where you were born?! Anyway, let’s continue:

Then things really got strange. Reporters revealed that in 2011, Salazar was accused of attempted bank fraud by the estranged wife of a famous neighbor, former New York Met Keith Hernandez.

Salazar was arrested but not prosecuted. She later filed a lawsuit accusing Hernandez’s wife, Kai Hernandez, of trying to frame her because Hernandez erroneously believed Salazar was having an affair with her husband. Kai Hernandez settled the lawsuit for $20,000.

Then, two days before the election, The Daily Caller told the Salazar campaign it was about to publish a story identifying her as a woman who had anonymously accused a spokesman for Israeli Prime Minister Benjamin Netanyahu of sexual assault.

Saying she didn’t want to be “outed” against her will, Salazar tweeted about the incident, saying the Netanyahu aide, David Keyes, had bullied her into an unwanted sex act.

Either of these two incidents alone may have been believable, but together, and also coupled with the incredibly dramatic “misrepresentation” of her origins…it’s hard to imagine this girl is anything but a crazy con artist.

But then again…would that really make her stand out in Washington?