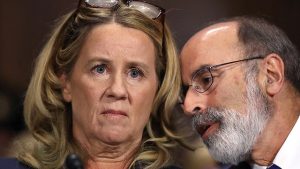 It’s certainly heartening to see that despite all the hoopla in Washington and the political weaponization of the FBI, a local police department won’t bend to the pressures of politics and go out of their way to accommodate a political spectacle.

Is this because I support Kavanaugh and am happy to see Senate Republicans get another feather in their hat with the affirming news that local police where the alleged assault of Dr. Christine Blasey Ford won’t be investigating?

It’s because the local police actually have standards, and stick to them, and believe it or not, they actually respect sexual assault victims far more than Congressional Democrats do.

The police department that has jurisdiction over the area where Christine Blasey Ford claims Judge Brett Kavanaugh sexually assaulted her says it has not opened an investigation into the matter because Ford has not requested one, among other reasons.

The Montgomery County Police Department says it stands by its “victim-centered” approach to launching investigations, despite Maryland Republican Gov. Larry Hogan’s call Thursday for a full investigation of Ford’s allegations and a Wednesday letter from 11 Democratic Maryland state lawmakers with a similar request.

A police department statement in effect as of Thursday explains its position, reported The Washington Post.

“At this time, the Montgomery County Police Department has not received a request by any alleged victim nor a victim’s attorney to initiate a police report or a criminal investigation regarding Supreme Court nominee Brett Kavanaugh. The department recognizes that victims of sexual assault may not want to involve law enforcement and/or initiate a criminal investigation, and we respect that position. The department, however, stands prepared to assist anyone who reports being the victim of a sexual assault.”

They also explain that, were the police to investigate, it would be tricky to actually do anything about it because in 1982, an attempted rape was a misdemeanor crime with only a one-year statute of limitations.

Also, back then, a sexual assault between acquaintances was rarely treated as a crime.

Feminists would have you believe that in Trump’s America we’re living in literally the Handmaid’s Tale, but far from it. Our laws have evolved significantly to protect sexual assault survivors, but sexual assault survivors have to actually approach the police to investigate the crime in this case. And it would probably help if their end goal was justice, rather than to upset a hotly contested SCOTUS nomination instead.