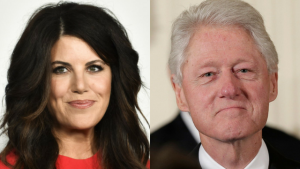 It can be awkward when you’re friends with people who have broken up.

You don’t know if you should take sides, or try to be friends with both exes. Even 20 years and a legendary political scandal later, apparently, you can still scramble at the last minute to make sure they’re not at the same event.

This is what apparently happened recently to Town & Country Magazine, when they allegedly disinvited Monica Lewinsky from attending their Philanthropy Summit event in New York City because, stunningly, Bill Clinton would be in attendance.

Lewinsky said that “Emily Post would not approve” in a sarcastic tweet about their entire lack of social grace:

dear world:
please don't invite me to an event (esp one about social change) and –then after i've accepted– uninvite me because bill clinton then decided to attend/was invited.
it's 2018.
emily post would def not approve.
✌🏼Me

She added that offering an article in their magazine instead was not exactly a great consolation prize.

p.s. …and definitely, please don't try to ameliorate the situation by insulting me with an offer of an article in your mag.

While Lewinsky, who originally made a name for herself 20 years ago for her extra-marital affair with then-President Clinton when she was a 22-year-old intern at the White House (just in case you have been living under a rock since the 90’s), did not specify which event she was disinvited from, the Huffington Post uncovered that she and Clinton had both been invited to the Town & Country Summit, but only Clinton attended.

A spokesperson for the former POTUS said they were unaware of Lewinsky’s invitation.

President Clinton was invited to address the Town & Country Philanthropy Summit. He gladly accepted. Neither he nor his staff knew anything about the invitation or it being rescinded. https://t.co/iZ0xtG4OvQ

Gladly accept he did, and was quite happy to take to the podium to introduce none other than pint-sized Parkland anti-gun activists Emma Gonzalez and Delaney Tarr, who one certainly hopes were kept an arm’s length away from the President as they’re just his type–young, impressionable, and fascist.

Honored to be speaking at the Town & Country Philanthropy Summit this morning. #tandcphilanthropy @sandyhook pic.twitter.com/dCdyg910jp

Fox News, who reported on Lewinsky’s shun from philanthropy event, could not immediately reach Town & Country for comment.

Perhaps we will see an article in their magazine soon on what not to do if you invite two exes to the same event, because they certainly demonstrated that on Wednesday!