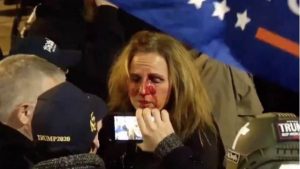 A mom from Massachusetts who went viral after her daughter publicly shamed her for attending an explosive pro-Trump rally at the U.S. Capitol has now lost her job as a nurse at a hospital, a position she occupied for 15 years.

What’s really heartbreaking is the woman is afraid she’ll never be able to get another job in the field.

Therese Duke told the Boston Herald she was innocently “looking for a place to eat” in Washington, DC, with “like-minded” Trump supporters when they were accosted by counter-protesters near the White House.

The melee on Jan. 5 — the night before rioters stormed the Capitol — saw her getting punched in the face, with her sister getting arrested for retaliating on the alleged attacker.

“I did nothing wrong,” Duke insisted to the Herald. “I was the one who was assaulted.”

She soon went viral, however, when her 18-year-old daughter, Helena Duke, mocked her as she identified her as being the woman in a video now seen more than 12 million times.

hi mom remember the time you told me I shouldn’t go to BLM protests bc they could get violent…this you? https://t.co/9ZkbAq0ehO

The nurse went on to state that ever since this went viral she’s received threats and that UMass Memorial Health Care went on to confirm that the woman is “no longer a part of our organization.”

Duke said that she felt as if she were forced to resign from her job, though it was noted by the Herald that she admitted to being “relived from my employment pending an investigation.”

“Anybody can Google me,” Duke told reporters. “Nobody will hire me.”

First off, this poor woman has the worst daughter ever. The little punk ought to be ashamed of herself for doing what she did to her mom in public. Kids today are so brainwashed by the left they think they can treat their parents like garbage and get away with it.

Secondly, no one should be fired for voicing their political opinions by attending a rally. That’s just not the way we do things here in the United States. Shame on the hospital for taking this course of action.

Here’s to hoping Duke can get back to work soon.