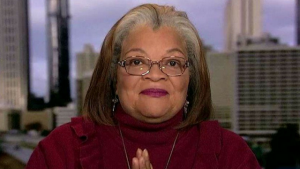 Yesterday, Starbucks closed upwards of 8,000 stores so their employees could participate in a virtue signaling extravaganza, which I think they were officially calling “implicit bias training.”

This was, of course, the incredibly overblown reaction to the high-profile arrest of two black men in a Philadelphia Starbucks who refused to leave when asked to do so by the manager. This was racist, you see, because they happened to be black while refusing to leave private property when asked to do so.

What followed was one of the most epic cases of overkill in the history of political correctness: multiple lawsuits, a meeting with the chairman of Starbucks, Howard Schultz, and a settlement with the Seattle-based coffee chain for an undisclosed, but no doubt hefty, amount.

However, as Starbucks chains across the country closed down to conduct their implicit bias training, Alveda King, niece of Martin Luther King, had a powerful bit of advice for Schultz: if you want to end bias, stop donating to Planned Parenthood. a

CNS News reports that King, who is the director of Civil Rights for the Unborn, signed an open letter, along with For America President L. Brent Bozell, Richard Viguerie, chairman of ConservativeHQ.com, and several other prominent pro-life activists.

The letter said, in part:

“Planned Parenthood Founder Margaret Sanger once said, ‘We do not want word to go out that we want to exterminate the Negro population,’” the pro-life leaders noted in their letter.

“In your April statement responding to the arrest of two African-American men sitting in one of your stores, you declared that Starbucks’ ‘founding values are based on humanity and inclusion.’

“As men and women who fight for the value and dignity of every human life, we ask:

“Where is the ‘humanity’ and ‘inclusion’ when your company matches employees’ donations to Planned Parenthood, whose founder Margaret Sanger was an outspoken racist with genocidal intentions?

“If you think this public relations fix means Starbucks is no longer complicit in racism, it’s time to wake up and smell your own coffee.

“Active with the Ku Klux Klan and the eugenics movement, Margaret Sanger’s stated agenda was to eradicate the African American population. Her dream is being realized by the slaughter of minority children today through the horror of abortion.

“With every donation your company gives to Planned Parenthood, the largest single provider of abortions in the United States performing over 300,000 per year, Starbucks is contributing to one of the most racist organizations in our nation’s history.

“… So if Starbucks wants to own the corporate mantle of ending racist business practices, then we challenge you to stop funding Planned Parenthood’s House of Horrors which has taken precious lives away from minority communities; and from society at large.”

Perhaps if Americans, and Starbucks’ management, were as outraged by systematic infanticide as they were about questionable cases of perceived racism, we might actually make some progress as a nation towards ending racism, don’t ya think?