Mitch McConnell Gets New Challenger, Here’s What The Senate Majority Leader Is Up Against 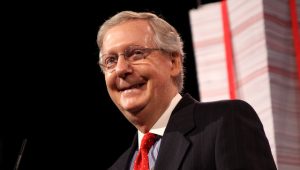 It’s time once again for Senate Majority Leader Mitch McConnell to face off against a new challenger for his seat, which typically consists of someone the left is willing to sacrifice for the sake of at least putting in some sort of effort to remove McConnell from his seat.

They’ve obviously not been too successful thus far, but will this be the one time that all changes?

The latest challenger is Marine combat aviator Amy McGrath, who lost her last election. But with Democrats the way they are these days, even losers get held up as formidable contenders. McGrath ran for the House of Representatives in 2018 and lost to Rep. Andy Barr – 51% to 47.8%.

Politically, McGrath holds some right-leaning positions, including support for the Second Amendment (though she renounced her membership to the National Rifle Association) and claims to be a fiscal conservative, though she opposed President Donald Trump’s tax cuts and repealing Obamacare.

On Tuesday, McGrath announced she would run against McConnell, writing on Twitter that “Everything that’s wrong with Washington had to start somewhere—it started with him.”

I’m running to replace Mitch McConnell in the U.S. Senate. Everything that’s wrong with Washington had to start somewhere—it started with him. With your help, we can defeat Mitch and defend democracy. Join us: https://t.co/c4b0WAp4ji pic.twitter.com/DNLjFkHGua

McGrath faces a rather tough uphill battle, especially since Kentucky is a very strong pro-Trump state. Rather than get down in the mud, McConnell’s official campaign folk tweeted out, “Welcome to the race, Amy.”

Much more classy approach than he could have taken, which just goes to show you the difference between right and left in the current political climate.

McConnell’s campaign manager, Kevin Golden, stated that McGrath is an “extreme liberal who is far out of touch with Kentuckians.”

No doubt that is very true.

Guess we’ll have to wait and see if McGrath has a real shot or not against McConnell, or if this is yet another sacrifice by the Democratic Party in a state they know they have no chance of winning.