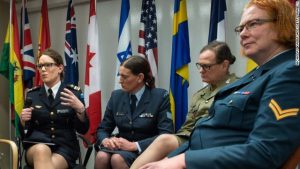 Yesterday I posted a video in which I state my logical reasons for banning the admission of transgender individuals into the United States military.  I expected the attacks that would be forthcoming and they did indeed.  In the two and a half minute monologue I clearly stated that my opinions regarding the stance of the White House on transgenders in the military does not come with condescension, condemnation, or judgement.

Unfortunately I was consistently accused of all three!

I appreciate all who have served in the United States armed forces and that includes anyone from the LGBT community.  I’m quite certain that many feel that statements from the president – or even myself – are a slap in the face to your sacrificial service.

At least speaking for myself, they are not.

However there are several reasons why I feel the ban is a good thing and even (as I’ve stated) a compassionate thing.  Many have said that it shouldn’t matter.  If someone is willing to serve, they say, and can pass the physical requirements to do so then they should be allowed.

Some argued that the same treatment and rhetoric of exclusion has been given to blacks and women in the past when it comes to serving.  I contend that that is an absolutely untenable example to compare this current situation.  I’ll say more on this later.

And of course there are some that would point to my lack of personal military service as a reason why I should just “Shut the **** up! And go away.”  Forget the fact, of course, that I come from a family with deep military roots, speak to thousands of active duty military members and veterans each year, and work closely with the USO and several other non-profit organizations that benefit our military men and women.

You also have no idea the level at which I’ve dealt with individuals struggling with their gender identity. But I’m sure those facts fall on deaf ears!

Indeed, when it comes to facts and logic we are often instead found reasoning through emotion and anger.  When the arguments run out we quickly turn to expletives and name calling. Nevertheless, as a glutton for punishment, I will go further and elaborate my previously shared opinions.

I will do my best to base them on facts.

We do not need our military wasting money on “transitions” for those who identify as transgender. How many will take advantage of this benefit in order to receive the surgical and medical assistance they can’t afford personally? Is it the military’s responsibility to pay for sex-change surgery, hair removal, and daily hormone supplements. It could even mean having reversal surgery for those who have second thoughts. Why in the world should the military be responsible for this?

Walt Heyer is a former transgender who underwent sex-change surgery (as it was once called). He has spent years researching the issues relevant to this. He points out that if the military is struggling to provide good health care for its veterans then why add to this a burden of several billion dollars to meet and fulfill the desires of transgender servicemen? And yes! Unfortunately you cannot deny the high percentage of mental and emotional disorders experienced by trans-identified individuals.

No one denies that the military has requirements for men and for women. Those requirements are different for each gender. One can easily see the confusion and complexity when men can become women and vice versa.  Must a female that is turning to male perform at the same level as other men? Their strength and endurance will not be the same in the majority of cases.

What if hormone treatments are not at hand during combat? Will this affect the person’s service? By comparison let’s look at another condition that requires ongoing treatments. Insulin dependent diabetics are disqualified from the military. Think about it. What if someone with diabetes is stuck in the desert with limited MRE’s and lacking insulin and has a spike or drop in blood sugar. Not only could they be seriously hurt or die but they may also endanger the team members that try to help them. How will a transgender person that needs their treatments be affected if they lacked them in a similar situation. These new issues should not be imposed on the military.

Finally, as alluded to above, transgender people are not the same as blacks or women (or even gay or lesbian) by comparison when we discuss exclusion from the military.  Minorities and women do not require medical treatments or surgeries to be who they are.

Listen…believe it or not I truly love people regardless of where they come from or their walk of life. I look at others with fairness and without judgement. However we cannot throw logic out the window in exchange for how we feel for others.  The military is an organization that seeks to strip the identity and individuality out of a person.  Why would we thrust individuals that are struggling to find and express both of those things into that environment and call it “fair?”

To those of you who have served and who are serving: Thank you!

However, I encourage each of us to consider the reality of what we are discussing.