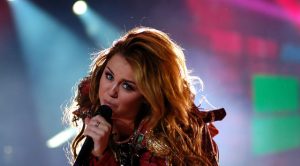 Miley Cyrus, daughter of mullet rocking Billy Ray Cyrus, and a “musician” herself by modern standards, decided to let the world know how much she loves being naked and supports the right of women to murder their unborn children by posting some seriously raunchy photos for a fundraising effort for baby murder mill Planned Parenthood.

One of the photos features Cyrus topless with a a pair of grapefruits covering her nipples along with the text “Don’t F*** With My Freedom.” Because, you know, it’s oppressive to dare protect the rights of the unborn and infringe on Cyrus’ liberty to kill these defenseless image bearers of God so she and others like her can have wild, promiscuous sex with zero responsibility.

The absurd photos sparked mockery from pro-lifers, but they also surfaced an accusation of design theft from a fellow pro-abortion feminist.

A D.C.-area baker known as “the sweet feminist” blasted Cyrus via Instagram for allegedly stealing her cake design. “[Miley Cyrus] just announced a collaboration with [Marc Jacobs], [Planned Parenthood], and the [Happy Hippie Foundation] using this image. It is a direct theft of my own original art work from May 2018, with no credit,” she wrote, captioning photos of the two cakes side-by-side. “It’s literally my exact handwriting, message, and concept. Swipe for comparison! Cake art is for everyone, but this is inexcusable.”

Cyrus replied to the baker in a comment, acknowledging that her team was “inspired” by the baker.

“Hi, we saw the image online and didn’t realize it was yours. We will absolutely tag you for your work,” she wrote. “This image is not on the Marc Jacobs x Planned Parenthood hoodie we made to raise money and awareness for Planned Parenthood which I know is also close to your heart. It is just on the post and not on the merchandise but we will absolutely tag you and give you the credit for your art.”

“If you could please correct your post, as we’re going to make sure you have all the credit you deserve… thanks for sharing your art and inspiring us,” added the “Wrecking Ball” singer.

When someone called Cyrus out for her wickedness, stating that abortion is selfish and mocking the idea that killing people is healthcare, the former Disney actress fired back by avoiding the issue and insulting the individual in a rather crude and crass manner.

“Oh that’s right, you only j*** off to while you play xbox live with a bunch of 14 year olds who’s [sic] brains are just as developed as yours.”