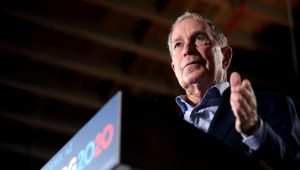 Former New York City Mayor Mike Bloomberg suspended his presidential campaign after a rather dismal showing during the Super Tuesday primaries, opting instead to throw his support — and probably millions — behind Joe Biden.

This is super good news for those of us who were beginning to develop serious paranoia after being bombarded endlessly with Bloomberg ads. However, the man himself is likely crying in his pillow at night looking at the millions he flushed down the toilet trying to buy his way into the Democratic Party nomination.

Former New York City Mayor Mike Bloomberg suspended his presidential campaign Wednesday after spending record amounts from his own fortune on an ad-blitz strategy that failed to yield any wins on Super Tuesday beyond a single victory in the American Samoa caucuses.

He immediately announced he would be endorsing Joe Biden, following in the footsteps of other moderate-leaning Democratic presidential candidates who have consolidated support behind the former vice president in his primary brawl against Vermont Sen. Bernie Sanders.

“I’m a believer in using data to inform decisions. After yesterday’s results, the delegate math has become virtually impossible – and a viable path to the nomination no longer exists. But I remain clear-eyed about my overriding objective: victory in November,” Bloomberg said in his statement.

Bloomberg finished well behind on Super Tuesday, despite spending more than a half-billion of his own fortune on his 2020 bid — centered on a strategy of skipping the early-primary stories in favor of Super Tuesday. To put his investment in perspective, he spent close to the GDP of American Samoa in order to win that contest — and only that contest.

“Mini Mike” went on to speak of his support for Biden saying, In backing the former vice president, Bloomberg emphasized: “I’ve known Joe for a very long time. I know his decency, his honesty, and his commitment to the issues that are so important to our country – including gun safety, health care, climate change, and good jobs.”

As you can imagine, President Trump wasted no time coming out and slapping Bloomberg around on Twitter.

Now the race is primarily focused on Biden and Sanders. One of these two will actually have to get on a debate stage with President Trump. Hope you have your popcorn ready!