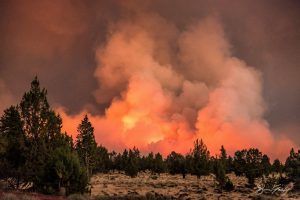 Across Montana today, firefighters are scrambling to keep up with dozens of new fire starts in the last 24 hours. Four big fires sparked on the east side of the state today, and the Flathead Beacon reports that there are 13 news fires in the Kootenai National Forest, some prompting evacuation warnings near Trout Creek and Thompson Falls.

Meanwhile, Oregon is struggling to deal with the largest wildfires to rip through the state in 13 years. The biggest fire is in an area called Chetco Bar. A blaze there that covered a quarter acre in July has spread to 130,000 acres, said Jim Gersbach, spokesman for the Oregon Department of Forestry’s Fire Protection Division. Elsewhere in the state, separate wildfires are each burning more than 10,000 acres, officials say.

So far this year, more than 1,500 fires have burned 937 square miles in Montana. The fires have already drained the state’s firefighting reserve fund and an emergency fund, and there is no end in sight for the hot, dry weather that the fires are feeding on.

The number of Montana National Guard troops deployed on wildfires in the state will roughly triple by the end of this weekend.

Governor Steve Bullock made that announcement today while warning of the immense fire danger over the Labor Day weekend.

There are currently more than a hundred national guard members working on fires in the state. General Matthew Quinn says more are on the way.

“That will include some line crews, that are being trained in the firefighting. More aviation assets will be rolling out, and more security assets.

According to the Governor’s office there have been more than 60 new lightning caused fire starts in the Rocky Mountain region over the last day, and only a handful of them were weren’t snuffed out in initial attacks. If lightning strikes the earth, officials say it’s almost a sure thing it will start a fire in current conditions.

Governor Bullock says as people go out to enjoy the holiday weekend they need to be mindful of the risks. Much of the state is in a red flag weather warning, and more dry lightning, wind and high temperatures will continue throughout the weekend.

“Recognize where you could actually be part of starting a new fire in what are some of the driest conditions we’ve have ever had.”

There are 23 large fires burning in the state spanning more than 200,00 acres.