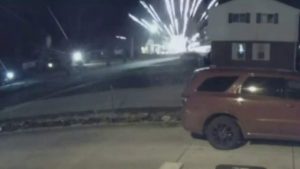 A man from the state of Michigan is claiming that he might have been targeted for his support of President Trump after an explosive was tossed into his home on Saturday morning.

The man, who lives in St. Clair Shores, did not want his name published by the media, stated that he and his girlfriend were in the upstairs bedroom when the explosion occurred. The blast blew out some drywall, shattered glass, and then caused cracks in the ceiling.

“We came out and there was a big mess here,” the homeowner told reporters. “Everything was smoking and I got on the phone and called 911 and they showed up pretty quick.”

He added that he heard two loud booms and that neighbors “thought a bomb went off.”

“We were really scared. I mean when you feel your house shake and explode and smoke, you don’t know what’s going on,” the homeowner told Detroit’s WDIV-TV.

When asked why someone would target his home, he suggested it was possibly due to his political beliefs.

“We’re thinking maybe because I’m a big Trump supporter,” the homeowner said, according to FOX 2. “I mean everyone has people that don’t like them … but not to the extent of trying to blow my house up.”

The man is now offering a $10,000 reward for information on the incident.

It’s a shame that we here in the United States, a free nation, cannot express our political beliefs without being harassed by those who see things differently.

We should all be allowed to express our thoughts, opinions, and beliefs without fear of being assaulted for them.