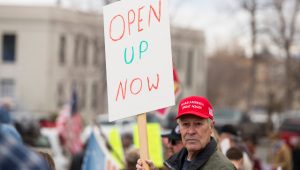 When it comes to overblown, melodramatic, knee-jerk reactions to even the most innocent of backlash against them, liberals in this country have become experts, master craftsmen in putting together responses that encapsulate everything wrong with emotionalism, usually summed up in two words: the race card.

You might not have even said a single word about someone’s ethnicity or skin color. That doesn’t matter in the slightest.

The latest example of this nuttiness comes to us from Michigan Gov. Gretchen Whitmer, who has become notorious across the country for draconian measures taken during the shutdowns that have been instituted as a means of controlling the spread of the coronavirus.

As American citizens have begun to get fed up with watching the economy tank and their livelihoods get flushed down the toilet, they’ve opted to hit the trail and protest, airing out their grievances, which is something that is their God-given right protected by the First Amendment.

According to Whitmer, this makes them horrible racists.

Michigan Gov. Gretchen Whitmer, a Democrat reportedly on the short list to be Joe Biden’s running mate, jumped into the game on Sunday. On CNN’s “State of the Union,” she said that the protesters surrounding the state capitol daily are carrying “swastikas and Confederate flags and nooses.”

“There were swastikas and Confederate flags and nooses and people with assault rifles,” Whitmer said. “Some of the outrageousnesses of what happened at our capitol depicted some of the worst racism and awful parts of our history in this country.”

“Holding American flags and handmade signs – and with some carrying firearms — the demonstrators in Lansing first congregated shoulder-to-shoulder on Thursday outside before demanding to be let inside the building as lawmakers were poised to debate an extension of an emergency and disaster declaration,” Fox News reported. “Some chanted ‘Let us in,’ The Detroit News reported.”

Other reports indicated that the swatiskas in question weren’t in any way supportive of Nazis, but were, in fact, calling Whitmer herself a Nazi for her massive government overreach. Again, that’s not the kind of melodrama we should really be pushing, but it’s certainly not hate speech or racism.

Whitmer seems to be losing touch with reality over this entire outbreak thing, becoming drunk with power and authority. Things will only continue to get worse if she doesn’t ease up.