Michigan Gov. Gretchen Whitmer Slammed For Lying About Her Out-Of-State Trip That Broke Her Own COVID Restrictions 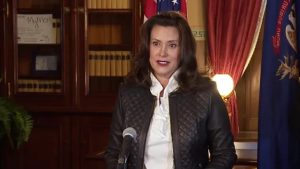 Michigan Gov. Gretchen Whitmer, a woman has become the walking definition of the term “tyrant” since the beginning of the COVID-19 pandemic, has come under some serious criticism this week for claiming to remain in her state around spring break time before it came to light that she had actually ignored her own COVID restrictions to pay a visit to her dad who lives in Florida.

Whitmer said on April 12 in an interview with MIRS News that she had “stayed in town” over spring break.

“Yeah, like most people on my team, we’ve been working 14 months without much of a break,” Whitmer went on to say. “Um, my, my daughter had spring break. Um, I didn’t do much of anything, you saw me, I was here in town the whole time, but, um, you know, it’s, the weather’s getting nicer, so I’m moving some of my zoom calls outside, that’s the most exciting, ah, development.”

Despite this claim, news broke on Monday that Whitmer had traveled in March to visit her elderly father in Florida while she was actively telling Michigan residents not to travel.

The governor’s office initially refuted the news, but her staff confirmed the trip the following day and asserted it was only a “two-day trip” and that she “wasn’t partying in Miami.”

Two of the governor’s aides were also busted traveling outside of the state.

This is no surprise. Leftists are always being hypocritical about practicing what they preach. It’s due to the power trip many of them are on.

Folks like Whitmer like to make the rules for those they consider less than them, the regular folk, while they live like kings and queens, doing whatever they please.

It’s time we stopped tolerating that kind of garbage and hold people accountable for their actions.