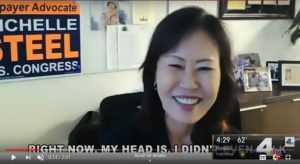 Congress-woman elect Michelle Steel managed to do the unthinkable by turning a blue seat red in the most liberal state in the country, California, which is a major accomplishment.

Steel has some good news for the GOP at large that goes hand-in-hand with her victory.

According to her, the Republican Party is growing.

“The Republican Party is growing. You know, me, with my accent, I still won and people actually, when we stick to the issues, and we just try to work with residents and work for residents, I think we’re going to keep winning,” remarked the congresswoman-elect.

Steel, 65, who speaks English as a third language, was born in South Korea and raised in Japan. During the interview, she shared that she first decided to run for public office after her mother, a small business owner, was “harassed” by a state tax agency (for what she has previously described as an “unwarranted” tax bill).

“That’s the way I started. This is my fifth election. I won all five,” Steel told Fox News. “You know what? I stand for American Dream.”

Yes, ma’am, you certainly do.

The fact she’s come this far in her career is proof that our system works, and I don’t just mean the election system. I mean the whole shebang. American liberty and the free market that enable anyone willing to work hard an opportunity to find success and happiness.