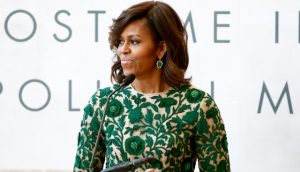 Former first lady Michele Obama has a new found passion for knitting that has caused her to begin thinking about retiring from public life for good.

And I think I speak for the majority of conservatives who would definitely agree it’s time for her and her hubby to quietly fade back out of the public eye and just live as normal people. Right?

“Knitting is a forever proposition,” Obama went on to say. “You don’t master knitting, because once you make a scarf, there’s the blanket. And once you do the blanket, you’ve got to do the hat, the socks.”

Apparently, Obama discovered a love for knitting while she was attempting to pass the time during the lockdowns that occurred at the height of the coronavirus pandemic. She said her next big project is making a sweater for her husband, former President Barack Obama.

“I’m figuring out how to make sleeves and a collar,” the former first lady said. “I could go on about knitting!”

While the former first lady enjoyed the extra time she was able to spend with her daughters Malia and Sasha, who came home from college to quarantine during the height of the pandemic, she also spoke of suffering from a “low-grade depression” around the time of George Floyd’s death in Minneapolis.

Now, Obama says she is moving toward retirement instead of back into the public eye, but still has a few more projects to tackle, such as her Netflix show Waffles + Mochi and finishing the now-under-construction Obama Presidential Center in Chicago.

“I’ve been telling my daughters I’m moving toward retirement right now,” Obama went on to say.

Both Michelle and Barack have stated they are looking forward to warmer weather so that the former president can get out to the golf course.

“Barack and I never want to experience winter again,” Obama stated. “We’re building the foundation for somebody else to continue the work so we can retire and be with each other, and Barack can golf too much, and I can tease him about golfing too much because he’s got nothing else to do.”

Well, he certainly got a lot of practice in while he was in office, didn’t he? You know, golfing while terrorists were beheading American citizens and all that jazz.

Anyway, go ahead and retire, Michelle. We probably won’t even notice you’re gone.