Michele Flournoy Could Be First Female Defense Secretary Under Biden; Might Be Forced To Shrink DOD 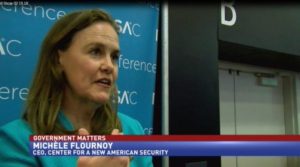 Michele Flournoy used to serve as the under secretary of defense for policy in the Obama administration where she suggested a yearly increase of the defense budget of around three to five percent.

Rumors are floating around that if Democratic presidential nominee Joe Biden is officially declared the president, he might appoint her to be the first ever female secretary of defense. However, policy experts claim she may end up having to do the job with a lot less resources.

“I have to believe she’s the odds-on favorite,” said O’Hanlon, who described himself as a “minor” adviser to the Biden campaign this summer but without direct knowledge of Biden’s current thoughts.

Flournoy is well respected in defense circles and served on the independent commission that helped formulate the 2018 National Defense Strategy that guided recently sacked Trump Defense Secretary Mark Esper. She also served as the chief adviser to the secretary of defense on national security and defense policy from 2009 to 2012.

What’s really interesting is these same experts believe Flournoy will keep the lion’s share of Trump’s defense policy in tact, rather than seeking to replace them with something else.

Jim Carafano, a security analyst from the Heritage Foundation agrees that the current policies will remain under Flournoy.

“I don’t think necessarily the policy will flip on a dime,” Carafano said.

When asked what he thought what changes might happen to the DOD under Flournoy, O’Hanlon stated that as far as budget, force structure, modernization, and overall priorities, nothing much would be different.

O’Hanlon also stated that the thinks key areas like the size of the military, the thrust of our National Defenses Strategy, and the emphasis on creating new technologies will also remain, along with our nation’s approach to its adversaries.