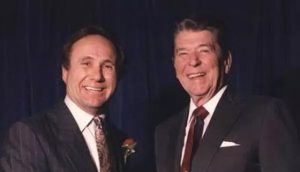 Michael Reagan, son of President Ronald Reagan and a popular political commentator in his own right, recently got a chance to share his thoughts and feelings concerning the leadership of President Joe Biden.

And it’s safe to say from his interview that he’s not at all a big fan of Biden and thinks he’s always been a poor leader.

Reagan made an appearance on The Chris Salcedo Show on Monday where he made a reference to the horrific drone strike attack that killed an aid worker and his whole family, going on to say, “what happened in Kabul where he announced he was going to do something; ends up doing what? He ends up killing innocent people to try and make a point that he’s a strong leader. He has never been a strong leader.”

According to the Washington Examiner, drone strikes will be the primary way the U.S. military will engage in counterterrorism in Afghanistan following the withdrawal of troops from the region. But in light of the Aug. 29 airstrike that killed the civilians, using drones to take out targets with a lack of intelligence demonstrates a marker of difficulty in the future.

Nathan Sales, who served as ambassador-at-large and coordinator for counterterrorism, said that “over-the-horizon counterterrorism doesn’t work. …We simply don’t have sufficient intelligence information to be able to order drone strikes from a thousand miles away with no intelligence assets in the country.”

President Joe Biden is a person who is totally self-absorbed. The only thing he cares about himself and his checkbook. A good leader is someone who possesses strong character.

Biden can’t even spell the word, let alone live out its definition. Just look at the track record he has for abusing his political power for personal gain. Evidence suggests he helped his son Hunter avoid being investigated by having a prosecutor in Ukraine removed from his position.