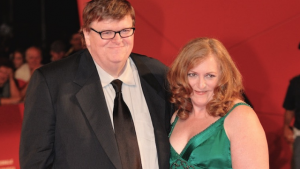 Behind every great man is a woman.

Who you probably never saw because the man in question is very…great.

Little did I know, but Michael Moore was actually married once, and not only that, but his formerly better half was apparently the driving force behind some of his biggest films (and she’d have to be very strong to be a driving force behind…OK I’ll stop with the fat jokes.)

The Washington Free Beacon reports that the former Mrs. Michael Moore, Kathleen Glynn, (who was likely never actually called Mrs. Michael Moore…you know, progressives), is taking the well-known leftist filmmaker to court over what she says are owed film profits he’d agreed to pay her.

The suit claims Moore has walked away from an arbitration agreement needed to “flesh out the terms of an important provision in their property settlement,” according to the New York Post. Moore, it argues, wants all of the benefits of their 2014 settlement in which Glynn “signed over essentially all of her interest in the fruits of the parties’ joint efforts as film-makers … in exchange for a promise of future revenue-sharing by” her husband.

“She was the driving force in the making of many of [his] films and other ventures in which Mr. Moore was the featured personality, dating back to their first big success, ‘Roger and Me’ (1989),” Glynn’s attorney writes.

According to the suit, Moore was supposed to pay Glynn 4 percent of total revenue from his films, but he paid her less than $600 in 2014. That would mean he earned under $14,000 during a seven-month period.

Apparently, Moore’s moral backbone is reserved for the indignation he displays in his films and does not extend to actually sticking to an agreement with an ex-wife.

Maybe she can make a movie about it!