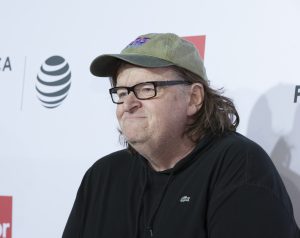 Imagine having such a narrow mind that you’ll only interact with (or even do business with) people who meet your strict socio-political standards.

It’s a sad, stunted way to live, but many folks are happy with it, including Michael Moore.

After news broke yesterday that Stephen Ross, the billionaire owner of trendy fitness centers like Equinox and SoulCycle, is hosting a high-dollar fundraiser for his ol’ pal Donald Trump in the Hamptons this weekend, folks like Moore blew a fuse. Because, apparently, nobody is allowed to support their president’s reelection anymore, let alone pay $100,000 to have their photo taken with him.

So, in response to the news, the fearless filmmaker put it all on the line to show his willingness to sacrifice for the cause of equality and justice and whatever else:

Now, to be fair, Moore is fully aware and occasionally makes self-deprecating jokes about his physical similarity to a manatee. It’s very likely that his declaration of boycotting SoulCycle is just that—a joke.

All the more reason for the People of Twitter™ to join in, right?

And join in, they did:

The *things that never happened* Hall of Fame would like to introduce our newest inductee: Michael Moore being a regular at @soulcycle classes. 😂🤣😂🤣😂

Our own Chad Prather tossed in his two cents as well:

From your phone…at the Golden Corral.

And, without fail, the fact-checkers came for Mr. Moore:

You cancelled a membership that didn’t exist. You’re so brave! pic.twitter.com/L9lnydsH9M

Although Mr. Moore was surely joking, a handful of folks cut to the real heart of the matter:

So what is the message between this and Joaquin Castro outing donors? No one is allowed to support Trump? The people accusing Pres. Trump of dividing the country are the worst offenders.

Do the same outraged ppl ask their Uber driver their political party? Their waiters/waitresses? Do they always question owners of restaurants before dining ? Imagine feeling so strongly about a cause but ONLY when u see something about it on social media. Hypocrisy at its finest!