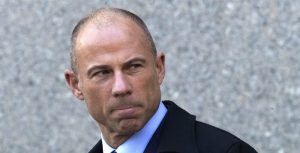 After making a name for himself by defending Stormy Daniels and earning his fitting moniker, he managed to weasel his way into the Kavanaugh sexual assault allegation circus, and likely undermined the Democrats’ entire operation with the addition of his client, Julie Swetnick’s, story.

Swetnick’s story, of course, which accused Kavanaugh of being “in the vicinity” when she was “gang raped” at a party in the 80’s, dissolved as soon as the witness she named turned out to include two deceased people, someone who couldn’t even be reached, and someone who had no idea who Swetnick was.

She also helped destroy her own credibility during an interview with CNN in which she couldn’t even keep own story straight.

The media soon forgot about her, much to Avenatti’s chagrin, so he, naturally, had to find a way to get his name in the headlines once again.

I’m having lunch with Michael Avenatti @MichaelAvenatti at the Vanity Fair Summit and he’s proposing a three-round mixed-martial arts fight with Donald Trump Jr. @DonaldJTrumpJr for charity. No joke.

This would be for two great causes. I’m in. https://t.co/zo46yhsXCi

My portion of the proceeds from the fight will be split 50% to rebuilding Puerto Rico and 50% to @RAINN. Just waiting on Bif to confirm. #Basta

Well, at least it’s for a good cause–hurricane relief, supporting victims of sexual assault, and giving us a whole lot of laughs, no doubt.

It didn’t take long for Twitter to do what Twitter does best: troll the heck out of Avenatti for this ridiculous idea.

That, or maybe Trump Jr. will just accuse Avenatti of “catcalling.”

Aventatti soon got the opportunity to prove he is indeed a tough guy:

Unlike Alexandria Ocasio-Cortez, however, Trump Jr. apparently hasn’t even had time to tweet about how he’s ignoring Avenatti’s request, which is (take note AOC), what one does when they genuinely don’t even feel such a silly suggestion is worthy of response.